"Holy banana, its a girl's leg!" Yep...the most famous quote in movie history...thanks to Herschell Gordon Lewis' "Color Me Blood Red" from 1965. This quote could only come from a film in which scantily clad bikini babes run and jiggle a lot and eventually get strung up and cut up...all in the name of art. Ah to live forever as a captured object of desire on a piece of canvas...what more could a beach frolicking bikini babe desire? This is kind of like an Elvis Presley beach musical...except without the music and with a little (...er...a lot actually) more blood. 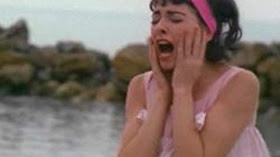 Adam (Gordon Oas-Heim) is a struggling artist. His newest pics are demented and weird, as usual, but their lack of oomph has buyers and art critics nonplussed. His sultry girlfriend/model, Gigi (Elyn Warner), always clad in a body-tight leotard, nags him to produce. By accident, Gigi cuts her hand and her blood drips  on the canvas. The red blood inspires Adam and before you know it...he shoves a knife in Gigi's head and uses all her blood. Now his masterpieces are back...but he doesn't want to sell. Inspired again, Adam seeks blood for the canvas...nubile-babe blood to be more exact. After harpooning Mitzi's boyfriend, he abducts her and strings her up. Poor Mitzi (Cathy Collins), Adam rips out her innards and produces another work. 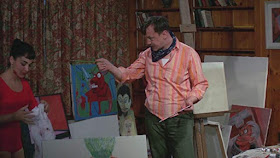 Now the demand for Adam's paintings is high, his thirst for human ( I mean babe) blood increases. Enter April (Candi Conder), clad in a pink bikini. Also enter the red bikini clad Sydney (Pat Finn-Lee)...and their hunk BFs Rold (Jerome Eden) and Jack (Jim Jaekel). We get a lot of gratuitous frolicking in the surf scenes by this quartet...Sydney and April seem to be in a jiggling competition. Uh oh..April isn't too bright...and Adam is like a great white who smells blood. Yep...April, clad in her bikini, will end up strung up and in much peril in Adam's studio as the jiggling Sydney finds the worm infested corpse of Gigi...hence the aforementioned quote.

Will the nubile April be saved by her hip friends or will her blood help produce the next deviant masterpiece? Is the blood of bikini babes in "Color Me Blood Red" a mere metaphor for the male interpretation of what happens to females during menstrual cycles? Is Adam a striking metaphor of what men in the art world think about women...mere objects of fatal desire? Bloody and gratuitous in bikini jiggling and blood...alas "Color Me Blood Red" is a film that will make you wince as you think about the fate of the next bathing beauty entering a Herschell Gordon Lewis film.
Christopher Zisi at 6:37 AM
Share