What is it with Charles Band and sultry Asian female lawyers? In 1999's "Blood Dolls" the fabulous Cindy Agami plays a lawyer who ends up tortured, stripped, humiliated...and shrunken into a doll-monster. So horrible, the very pretty actress, making her movie debut, would never appear in any other film. So today we look at 2007's "The Haunted Casino" (aka "Dead Man's Hand"). Still harboring something evil for beautiful Japanese lawyers, Charles Band does something similar to actress Diane Mizota. In the opening scene, wearing a smartly sexy business suit, this beautiful real estate attorney has her head crushed as she is slashed to pieces. 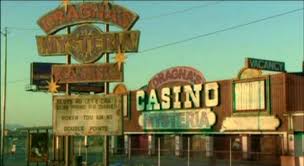 With the aforementioned Diane Mizota torn apart by vicious ghosts...the plot advances. Matt (Scott Whyte) inherits a long abandoned casino. He and his pretty GF JJ (Robin Sydney) go to claim it with a bunch of their great looking friends. Most notably is annoying rock-star Skeeter (Kavan Reece) and his skank GF Paige (Kristyn Green). Also along is the annoying third wheel Jimbo (Wes Armstrong) and the nerdy but attractive Emily (Lily Rains). An annoying group, but fear not, they will begin dying horribly. 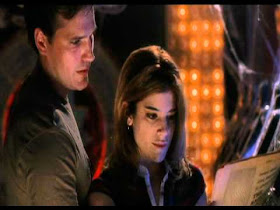 The ghosts appear...and they are mean. Roy (Sid Haig) and Gil (Michael Berryman) partook in a massacre at the casino back in the 1960s. Dead now, they return to exact revenge from the heir of the man who cheated them out of a fortune. A machete wielding blackjack dealer (Kristopher Logan) and a voluptuous cocktail waitress (Jessica Morris) will also return from the dead. Unfortunately for the skank Paige, she will tick off the ghost waitress and...well...you'll see. Now as the ghosts begin playing rigged games of chance with the living, limbs are lost and lives are sucked out of their bodies. Now Matthew must think fast and turn the tables on his dead tormentors if he plans to survive and also save the nubile JJ. 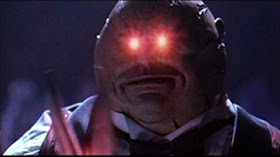 Just what is Matthew's strategy for beating the cheating ghosts? What happened decades ago to set these vicious ghosts against the heir of the casino owner? Is Charles Band still upset about Pearl Harbor? This is a neat one from Full Moon Entertainment...though hardly a classic. Fans of Full Moon Entertainment will want to check out "The Haunted Casino," directed by Charles Band.
Christopher Zisi at 12:18 AM
Share