Even though the premise of this film may not be entirely original, 2002's "Jigsaw" still comes across as quirky and unique. From Charles Band and Full Moon Pictures, we have a terrific slasher film with underwear clad damsels and drunk hunks beset by a most original slasher. Many will be reminded of the 1980s classic "Pieces," but this one has a twist...and a different surprise ending. 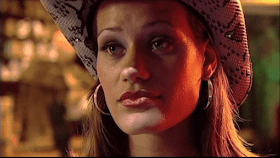 Slick Junior College professor, Colin (Barret Walz) assigns his five students a weird project. Each will take a piece of a mannequin (two arms, two legs, and a head) and make it into a unique piece of art. Then they will convene at a bar and reassemble the mannequin exposing the personality traits and desires of the group. Oh yes...shots and beer will be heavily consumed. Val (Mia Zifkin) has a crush on Colin and he tries to get in her pants. When this doesn't work he will try the same to married Louise (Maren Lindow). Oh yes...Tawny (Aimee Bravo)! She is gratuitous and every shot of her is...well..gratuitous. She'll spend much of the film either exotic dancing or clad in alluring undies. Can you guess if she will survive this film? 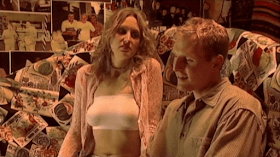 Okay, the thing is reassembled and as the class gets more drunk they burn it in a bonfire outside the bar. Surprise! The mannequin, Jigsaw (Brain Ellis) comes alive. He has a rotating saw blade as an arm and uses it to disassemble the class. He takes arms...legs...and now needs a head. As the hunks and babes fall, Jigsaw seems to want to assemble his own mannequin using human parts. Tawny will do her dance, beg for pre-marital sex while drunk and then come face to face with Jigsaw...so sad. Val and Eddie (Arthur Simone) seem to fall in love as Professor Colin emerges as a cad. Now Jigsaw looks to complete his mannequin and his saw-arm is just getting started. 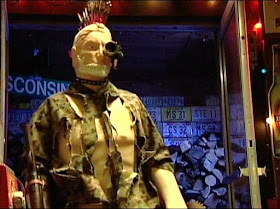 Will there be a final girl, and if so does the lead skank, Tawny, have a shot at that role? How about this smooth but perverted Professor Colin...did he know Jigsaw would come to life? Which head will Jigsaw choose, and will it be a hunk's or a babe's? This is a gratuitous one both in gore an in cheesecake, and the underwear laden ending will surely please you guys out there. Enjoy "Jigsaw," directed by Don Adams and Harry James Picardi.
Christopher Zisi at 6:51 AM
Share