The Demolitionist, The Femme Robocop

A rip-off of "Robocop." Perhaps. In fact, the plot to 1995's "The Demolitionist" is a mirror image to the plot of 1987's "Robocop." Still, this film is one we can all appreciate for one unique difference. Instead of Peter Weller killing massive amounts of seedy criminals, we have Nicole Eggert ("Baywatch"), clad in a nice tight black catsuit, killing massive amounts of human of deprivation.  Nothing against Peter Weller, but Nicole Eggert brings in a different kind of appeal. 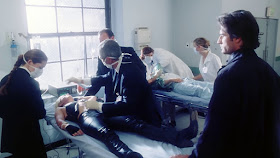 Mad Dog Burne (Richard Grieco) escapes from the electric chair, not before murdering the warden, guards, reporters, and assorted witnesses. Now he's loose and reclaiming the city's largest criminal enterprise. Undercover policewoman Alyssa (Eggert) has penetrated his gang, clad in an alluring tight black leather outfit. Uh oh, Mad Dog finds out she is a cop and tortures her before killing her and stringing her up. The mayor (Susan Tyrrell) is upset as the rise in crime hampers her reelection efforts. Enter Professor Jack Crowley (Bruce Abbott) with his Lazarus project. Yep...you guessed it...the Baywatch babe is brought back to life and is indestructible. 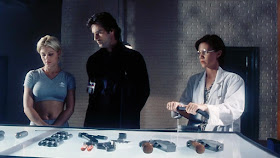 She's set loose on the city's criminal element and mows down scored of deviants with high-powered weapons and grenades. Sadly, betrayal and a determined Mad Dog start her undoing. As the media turns on her, so does the mayor and the police force, and now Professor Jack is ordered to scrap the Lazarus Project. Jack has grown to like Alyssa...after all, she is played by Nicole Eggert, and together the duo plan one more heroic, but far-fetched, attempt to kill Mad Dog and his entire gang. 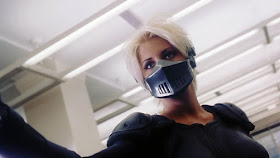 Nicole Eggert plays the role well and mows down hundreds. I left out large elements of the plot, but if you say "Robocop," you have an idea of those plot devices. This is a vicious one and Alyssa will go through punishing and humiliating torment in her quest to kill Mad Dog. If you found "Robocop" a bit over-rated and preachy, enjoy Nicole Eggert in "The Demolitionist."
Christopher Zisi at 2:10 PM
Share