What could go wrong? A spaceship manned only by six beautiful women. A long journey through the galaxy without men. Bickering, brewing cat-fights, applying make-up, activating shields...what is a gal to do on these long missions? Any man would tell you...this won't go well. Any woman will tell you they will be just fine as long as men stay off the ship. Both sexes may be right. Hence, 1997's "Convict 762." 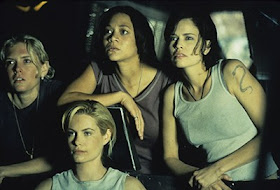 Because of the incompetence of Reno (Tawny Fere), the ship's sultry spaceship navigator, Captain Nile (Shannon Sturges) must land her ship at a penal colony in space. Unbeknownst to the attractive crew, a messiah-like convict has murdered everyone there except an intergalactic cop trying to kill him. Nile quickly finds out this reality as cryptic radio transmissions arrive saying stuff like "Die! Die! Die!" A clue. Uh oh, a wounded hunk, Vigo (Frank Zagarino), storms on board. He tells the crew about the uprising and they all need to leave or Convict 762 will kill them all. Big problem...is this wounded hunk Convict 762? Double uh oh...an SOS beacon is heard and Nile takes three women with her to investigate, deep into the prison...bad idea! 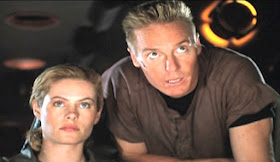 The very lovely Lincoln (Merle Kennedy) is left on board. She fantasizes about pre-marital sex with Vigo. She is then butchered by...well, by somebody. The rescue party doesn't fare much better as they are stalked and one beauty, Helene (Charlie Spradling) is presumably killed. The survivors cowardly run back to the ship to find Lincoln's bloody remains, Vigo gone, and Mannix (Billy Drago). Mannix? Yep, he says he is part of a construction crew, witnessed the uprising, and is running for his life. He also adds Vigo is Convict 762, and they all need to get off the planet now. As Nile wastes a lot of time, the beauties continue to fall and...uh oh...Vigo is back with Helene (but is she alive?). 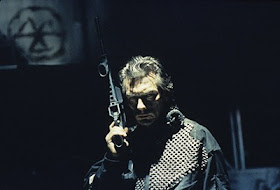 Is Vigo or Mannix Convict 762? Will the answer come down which bloke Captain Nile wants to have pre-marital sex with? Will Captain Nile be able to save any of her crew, or will she be the 'final-girl'...or will there be 'no-girl' as this film ends? This one will have you guessing and you will watch a spacebabe tragedy unfold before you. Heartbreaking and gritty, enjoy "Convict 762" directed by Luca Bercovici.
Christopher Zisi at 2:19 PM
Share