Wow! What an ending! Shocking, twisted, gory...and it goes places even the more extreme horror films of our times won't go. Hence the magnum opus of Dani Thompson (star, producer, writer, costume lady, etc.), 2014's "Serial Kaller." Forget about lines in the sand, this horror movie speeds  past them. Gratuitous in kinkiness and gore, with tons of some really imaginative kills, "Serial Kaller" might be the most graphic fright-fest you have seen this millennium. 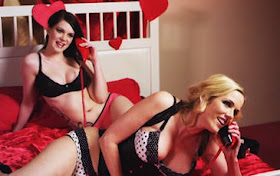 Some of the most buxom and shapely women you have ever seen man an internet phone sex studio. The lingerie clad beauties are waiting for you to call in so they can talk dirty to you. The seductresses talk to customers while the schmucks watch them on the computer. Tonya (Thompson) and Claudia (Lucinda Rhodes) are buddies and and seem to have what it takes to be the final girl. Uh oh...performers will eventually start meeting gruesome fates. Two of the performers have set themselves apart and double team on the phones, Lucy (Suzi Lorraine) and Frankie (Jessica Ann Brownlie). The gals may seem amicable to each other, but deep down, they want to scratch each other's eyes out. As the sultry get sliced and diced, the suspects increase. 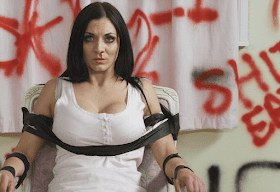 There is a weird caller (are there any other kinds in this industry?). There is a maniacal producer who is also a pervert, Jack (Stuart Brennan). Then there is Steph (Debbie Rochon). Though as sultry as the fetish gals, she is rejected when she tries to get a job at the studio. The other girls make fun of her age and are cruel. Steph, a cocktail waitress, must watch as the gals behave badly at her lounge. I haven't even mentioned the backstory that opens the film, but suffice it to say, it does provide a twisted motive for the butcherings. Electricity, big knives, disembowelment, drowning, pavement, and a BDSM whip are only a few of the murder weapons. 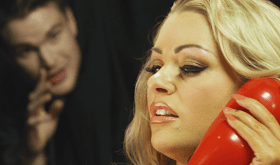 The trashier the gal, the more gory the death in this one. Is there a pervert caller or crew member responsible for the puree of the beautiful? Could one of the stunning sex-gals be eliminating her competition? Is whatever is contained in the backstory related to the massacre? Though none of the gals merit us pulling for them, we still pick favorites (mine are Claudia and Tanya). This film goes too far but for fans of this blog, that's all right. 50% allure and beauty, and 50% of spilled blood and guts, "Serial Kaller" (directed by Dan Brownlie) is a must for the hardcore (use that term how you wish) horror fan.
Christopher Zisi at 2:10 PM
Share