A film noir take on the Yugoslavian take on werewolves! Yep, there is beauty in the swamp if you look in the right places. Jason Croot has crafted a film that shows us the importance of looking for beauty in the swamp. Today we look at "Le Fear," in which a bloke making a movie will need to find the beauty when everyone around him only sees swamp waste. What follows is hilarious, and what many of you filmmakers might see as biting reality. 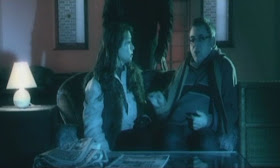 Carlos (Kyri Saphiris) rents a warehouse to film a horror film. Interspersed with a casting call, our filmmaker sweet talks...and scams...a shady money-man (Fred Moss) to fund the project. Carlos isn't really into minute details and nailing down facts isn't a priority for him...and either is checking references. In several hilarious takes, we see Carlos choose his leading lady, Debbie D (Lucinda Rhodes) and leading man, Leon (Spencer Austin). These two will gel like Mentos and Diet Coke. In fairness to Carlos, a lot of us guys would be wooed by Debby D's adult-film experience. Also hired are the crew and they are something. Ilona Saic is Gabby the make-up lady, and her assistant, Pretty (Meaw Davis). As Pretty hawks pirated DVDs the entire film, Gabby talks non-stop about herself. 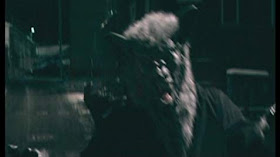 The filming begins and the talent appear as competent as a government funded health care program. The scenes get filmed with lots of takes and the egos and eccentricities of the cast and crew nearly tank production. Oh yes, the werewolf and vampire? You will have to see them. I'm not saying they're not scary and maybe a bit silly looking, but I have rarely have laughed so hard. As everyone turns negative and threatens to give up, Carlos keeps finding the beauty in the swamp of a production. Assuaging the egos of his talent and keeping his crew feeleing relevant, Carlos has taken on a herculean task. 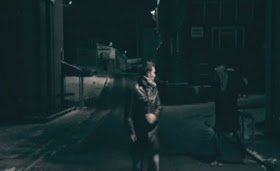 Those of you have made films will recognize most of these scenes. As ridiculous as they may seem, the eccentricities of the creative do lend themselves to hilarity and weirdness. Sure, Jason Croot's "Le Fear" is a comedy about a schmuck making a horror film...but may also be a realistic chronicle of making a movie with slimy producers and the more...shall we say...creative elements of our population. For tons of laughs, see Jason Croot's "Le Fear."
Christopher Zisi at 2:43 PM
Share