Michael and Gerald Crum would have been my best buddies in the 80s. We obviously loved the same films. "John Carpenter's The Thing," "Poltergeist," "The Evil Dead," "Paranormal Activity," "The Blair Witch Project" all come to life in this year's "Lake Fear 3." I'm going to have to view this one again as I know I have missed some references. This writer/ director combo deliver us a maniacal demon, guts spewing, bloodbath of terror...just the way we like it.

We first meet Remi (Joshua Winch) in a scene that will make fans of "The Thing" cheer...think the CPR scene. Like many of us, Remi is always covered with human guts (usually someone else's) and in bad need of an adult beverage.  Its apparent that these demons are pursuing him, endangering everyone he meets.  He is...well...a poor man's Ash (...think "The Evil Dead"). Enter the ravishing, blonde Revel (Shanon Snedden). The buxom, nubile babe is hitting the streets looking for her sister who went missing two years ago. Look fast as Revel won't be ravishing too much longer. Accompanying her is a sultry brunette, Chloe (KateLynn E. Newberry). As Revel's BFF, Chloe worries that her pal's obsession may lead to bad stuff...it will. With no clues as to the sister's whereabouts, the babe-duo come across Vincent (Devi Khajishvili)...think Syfy's Jonathan Edwards. The gals hope this TV personality/fraud can contact the other side to get a line on the sister's whereabouts. 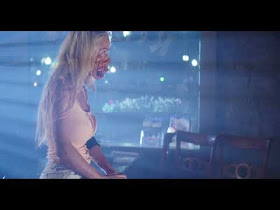 This now trio will hit a bar for an adult beverage and a poor man's seance. Too bad for them as it is the same establishment Remi shows up...thus, all of his demon pursuers, as well. After some shotgun carnage, Revel is overtaken by a demon and all her beauty is replaced by bloody horror. Now Revel tries to eat Chloe and Vincent. A bit slow on the uptake, Remi saves the two survivors and flees. This new trio is now pursued by Revel, who wants to eat more of Chloe...okay, I'm not going to say, "...and who wouldn't?" Vincent and Chloe get some bad news from the mysterious drifter, he has a plan to get rid of the pursuing demons. Of course Remi's plan will be fraught with blood-spattering danger and bring our good peeps face to face with angrier demons. 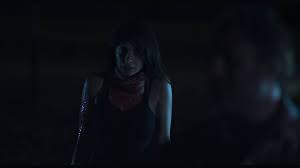 What follows is a war against the ungodly. Will our trio survive their demon tormentors? Will Chloe remain a babe and avoid being digested by her former BFF? Will Remi enjoy the good fortune, if you can call it that, which Ash enjoyed in "The Evil Dead"? Guts will fly, faces will be ripped off, appendages will turn into slimy monsters! Enjoy "Lake Fear 3," and count the number of homages to classic horror films which appear on the screen.
Christopher Zisi at 12:06 AM
Share