The haunted house! Add in some great looking young actors and actresses, a bunch of complicated computer technology, some malignant ghosts...and yes, a proclivity for making bad decisions and we have 2009's "Dark House." As light and playful as this film could have been, instead director Darin Scott gives us a dark and ominous gore-fest. Oh yes...this film stars Jeffrey Combs. 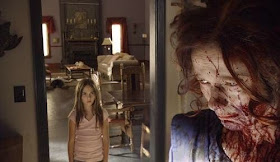 Many years ago Mrs. Darrode (Diane Salinger) murders her seven foster kids and shoves her own arm into a garbage disposal to commit suicide. The bodies are discovered by a little girl who entered the home on a dare. 14 years later, that little girl Claire (Meghan Ory) is grown up and seeking heavy psychological help for depression, anxiety, insomnia, etc. Her discovery many years ago has left her a mess, and suicidal. Claire is part of an advanced acting class which gets hired by show-man Walston Ray (Combs). Ray has opened up haunted houses all around the country (sort of a demented Walt Disney). His newest venture is the Darrode house. Claire is certain that facing her fears, or a return to the horrible events in her past, will cure her of her psychological maladies (...yeah right!). She doesn't tell anyone that she has been in the house before, convinced there is no danger. 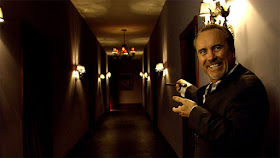 Combs has hired the cast to assume roles in the haunted house. Claire will be the horror guide, entrusted with touring some reporters through the attractions. The house is equipped with a complicated computer system that generates horrific holograms to torment visitors. Oh oh! Ghosts don't have a sense of humor an they take over the computer and now instead of holographic images, the scares will be from ticked-off ghosts of murdered children and Mrs. Darrode, herself. The actors and actresses will die quite horribly one by one. An iron maiden, a mad scientist's acid, and a monsters long fingernails will dispose of some of the cast. Meanwhile, Walston, seeing his investment plummet, thinks up ways to make the carnage work for him. As the ghosts whittle down the living, Claire has an opportunity to really face her fears from 14 years ago. 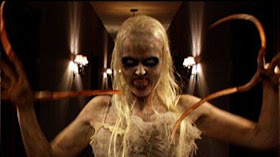 Do the ghosts and Mrs. Darrode have something special planned for Claire? Will Walston be able to exploit the carnage that is unfolding before his eyes? Will either Claire or Walston, or any of the other actors or actresses survive this night of terror? Perhaps "Dark House" is a metaphor for the dangers we all face relying too heavily on computer technology. More likely, however, this film is a modern day haunted house film utilizing gore and an attractive cast to deliver thrills and chills. For a neat Jeffrey Combs horror film, enjoy "Dark House."
Christopher Zisi at 12:29 AM
Share