Ah, those ancient Etruscans!  In their time they were quite strapping. Centuries later, however, they are reduced to rotting walking corpses with worms and maggots coming out of their faces. Though their mastery of the black arts enabled them to overcome death, their ability to fight decomposition still lacks (alas, Oil of Olay wasn't invented until the 20th century). Avid readers of this blog will remember the Etruscans from my write-up of The Dead are Alive . So get ready, today we look at another Italian zombie film, 1981's "Burial Ground" (aka "The Zombie Dead" and "Le Notte del Terrore"). 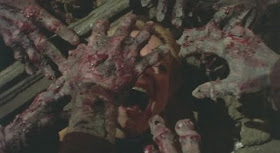 Three very attractive and amorous couples arrive at an Italian villa to visit Professor Ayres (already eaten). Ayres wants to tell them about the Etruscans efforts to defeat death, but he is nowhere to found. Being full of hormones, all the couples engage in sexual intercourse.  Evelyn (Mariangela Girdano) and George (Roberto Caporali) have brought their creepy son Michael (Pietro Bertzocchini) with them. Michael, a 12 year old, has an acute Oedipus Complex and before the film ends will engage in a very intimate make-out scene with Evelyn.  When the professor still doesn't show up, our couples move outside for more sexual intercourse. 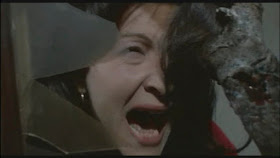 Here come the Etruscans!  Dripping with worms and maggots they begin their attack.  Janet (Karin Well) and Mark (Gianluigi Chirizzi) are first interrupted and barely get away.  The nymphomaniacs make it back to the villa and the zombies try to get in.  Trapped, Kathryn (Anna Valente), the sultry maid, looks around and falls victim to some very industrious undead.  Her beheading is one of the greatest zombie film deaths you will ever see.  The stunning Leslie (Antonella Antinori) will be next to go and if glass shards in eyeballs is your thing, this demise will please you very much. As the zombies get smarter, the remaining survivors come up with an escape plan.

Will our nubile women and hunk guy survivors be able to flee the Etruscans?  Will Michael's fascination with his mom's breasts play out in disgusting and terrifying fashion? Are the Etruscan zombies a mere metaphor for mass culture, and the sexy survivors a metaphor for the ever decreasing block of individuality (okay...a stretch, I admit).  "Burial Ground" has a lot of gore, most notably, lots of intestine-eating scenes.  The cast is great looking and the sets are creepy.  For some added culture in your movie-watching life, try "Burial Ground."
Christopher Zisi at 12:44 AM
Share