Night of the Lepus, Bunny Carnage

The 1970s fostered a fear of rabbits throughout western civilization.  In "Monty Python and the Holy Grail," a monster bunny pureed several of King Arthur's men.  Even worse, 1972's "Night of the Lepus."  In this horror flick, huge bunnies devour Arizona.  Instead of being menaced by Norman Bates, Janet Leigh will be tormented by thousands of huge rabbits. Oh yeah, remember McCoy (DeForrest Kelley) in "Star Trek"?  He too will be terrorized in this film by monster rabbits. 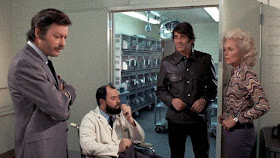 Apparently rabbits ate Australia in 1954.  Now it is happening here.  Cole (Rory Calhoun) has a horse and cattle farm that is threatened when a rabbit infestation eats all the plants and drinks all the water.  Enter Roy Bennett (Stuart Whitman) and his wife Gerry (Leigh). These two scientists attempt to reduce the rabbit population by altering their hormones so they stop mating.  EPIC FAIL!!!  You guessed it, the bunnies grow to the size of elephants.  The Bennetts' and a science guy from the university, Elgin (Kelley), instead of eating crow, attempt to assist Cole in saving Arizona's farm land.  These long-eared, and now long toothed, vermin are hungry and devour miners, campers, truckers, horses, cattle, more campers, a town, etc. 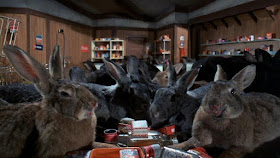 As the bloody carnage dots the Arizona desert, our quartet fail to stop the fiends with explosives.  The several hundred rabbits quickly become several thousand and begin a death hop toward more farms and towns.  The National Guard readies some fighter bombers and the surviving Arizonans grab their guns and flamethrowers (Yes!!!).  As all looks lost, Bennett comes up with a wild plan that taps into the triple feature at the local drive-in.  It's far fetched, but it just may work. 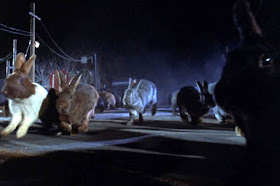 Are our long-eared tormentors a mere metaphor for what happens to us humans as we experiment on the animal kingdom?  Is it true that DeForrest Kelley sought out the role of Elgin in order to build up popular support for Star Trek's "The Trouble with Tribbles" episode?  If the Syfy Channel existed in 1972, would we have had "Lepus vs. Anaconda" in 1973?  "Night of the Lepus" is a lot of fun and surprisingly gory.  Fans of the 1970s will love this film, and of course, the rabbit community will view this 90 minute horror fest as an orgasmic cinematic jaunt.
Christopher Zisi at 12:54 AM
Share