Last October I reviewed Day Watch which is the sequel to 2004's "Night Watch." Both films were directed by Timur Berkmambetov and filmed in Russia. Ambitious, action packed, gory, and playful, these films are fascinating.  Sadly, the sultry Russian rock star, Zhanna Friske died recently (immediately after giving birth to her son).  So again, let us look at an apocalyptic tale featuring vampires, shape-shifters, ancient prophecies, witches, and magic. 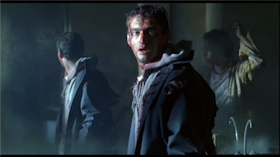 Anton (Konstantin Khabenskiy) is key in the battle between the light ones and the dark ones. Most are born into one of these camps, but Anton is special.  He is an "Other," and chose his side.  Uh oh, his son is also an "Other," and will be soon asked to choose.  Evil forces have a head start and beckon Anton's son..in the form of a beautiful vampire (pictured below).  To make matters more complicated, Svetlana (Mariya Poroshina) finds herself in the middle of Anton's pursuit of his wayward son.  Svetlana has been cursed, and all who enter her life meet their demise.  Svetlana's curse will eventually cause a decisive battle between light and dark which could destroy the world...unless Anton can find the source of the spell. 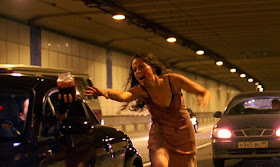 Anton must battle vampires and magic in order to save the world, and his efforts appear to be falling short.  Help is on the way, the forces of light match him up with Olga (Galina Tyunina). Because of crimes long ago, Olga was turned into an owl.  She is restored to human form perhaps with a chance at redemption.  Anton would remark to her that he has never heard of that punishment....for which Olga informs him, "You have never heard of the crimes I committed."  Quarterbacking the dark forces pursuit of Anton's son is the supreme dark one, Zavulon (Viktor Verzhbitskiy), who proves to be a formidable foe.  His minions include a beautiful rock star, Alisa (Friske), who will duck out of a sold-out concert at his asking. 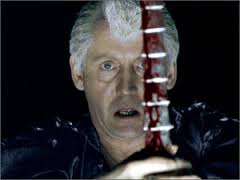 Like "Day Watch," this sounds so complicated.  The key to understanding both these films is not to try to figure them out.  By the final credits, you'll get it.  The ending provides a smooth segue to the equally energetic sequel.  Discussion of a third movie in this obvious trilogy may have been derailed by the all too premature death of Ms. Friske.  Available on Netflix....enjoy the ultimate battle of good and evil.
Christopher Zisi at 6:24 AM
Share