Yep, "Here, hold my beer," is a quote always followed by carnage.  A trip to the ER perhaps. Stitches are a likely possibility. In rare cases a tourniquet should be applied.  In 1979, Alfred Heineken was kidnapped for a gargantuan ransom in Amsterdam.  This is the story.  In 1979, the usual suspects included the Red Brigade and the IRA.  In reality, five schmucks pulled this off....actually "pulled this off" is not the applicable term here.  What most schmucks, seeking to get rich fast, soon find out is some wisdom shared by Alfred Heineken...."You can either have a lot of friends or have a lot of money...not both." Today we examine 2015's "Kidnapping Mr. Heineken." 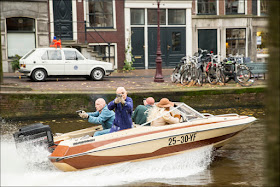 Our schmucks are likable sorts.  Their business went bankrupt and the banks won't give them loans. Squatters have infested the building they own. Cor (Jim Sturgess), the leader has a pregnant wife, Sonja (Jemima West). Cor thinks big and with his chums, concoct a plan to kidnap the richest man in Holland...Alfred Heineken (Anthony Hopkins).  To pull it off, they need money for guns, supplies, and equipment, so they rob a bank....successfully! Then they grab Heineken, and believe it or not, they do a good job. We watch this movie from the point of view of the villains, and do not see all the police work being done, but are privy to stupid mistakes our gang makes along the way. 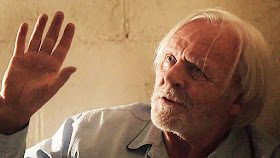 Uh oh....there doesn't seem to be any rush for anyone to pay the ransom, and the deadline comes and goes.  Heineken begins to work on his captives and he is clever. Also abducted is Heineken's driver, and the beer magnate fears that our gang will kill him first now that the ransom has not been paid.  As days turn into weeks, our kidnappers begin doubting themselves and bickering sets in, testing their allegiance to the original plan. Not killers at heart, killing their hostages is now an option they consider. Confidence and patience have gone out the window and paranoia has entered all their minds.  From history, we know Mr. Heineken will be recovered, but what of our in-over-their-heads-gang? 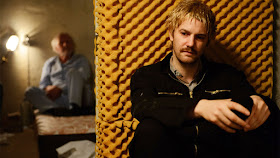 The epilogue is fascinating, and part of one of the greatest crime stories in European history. Anthony Hopkins is fantastic and so are our villains.  Next time you throw back a few cold ones, remember that the suds in that green bottle have quite a dramatic history to them.  Shot largely in Amsterdam, the scenery is beautiful. Available on Netflix, don't miss "Kidnapping Mr. Heineken."
Christopher Zisi at 5:40 AM
Share