The Legend of Hell House, Get Out!

No, not "Planet of the Apes," but 1973's "The Legend of Hell House" is Roddy McDowall's best film. Remember what happened in Amityville, New York?  Well, what happened in Hell House is 1000 times scarier.  Where else can you combine seances and electroplasmic reversers in your combat against the other-worldly?  Written by Richard Matheson, recent popularity with paranormal films make this a ripe time for this film to hit Netflix. 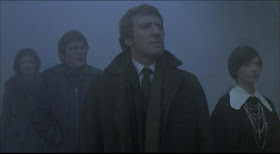 Previous attempts to rid Hell House of evil ghosts failed.  All died except physical medium Benjamin Franklin Fischer (McDowall), but he emerged a bit loony.  Now a dream team of paranormal investigators has been assembled to go into Hell House and figure out what is going on.  Emeric Belasco (Michael Gough), who was into vampirism, sadism, bestiality, perversion, cannibalism, etc (not that we're being judgmental)...built the house and still haunts it.  Dr. Barrett, a physicist leads a team which includes Fischer, a mental medium Florence Tanner (Pamela Franklin), and Barrett's hot, tending toward nymphomaniac-wife, Ann (Gayle Hunnicutt).  The cavernous mansion, which has had the windows bricked up, awaits our team.  Instantly, Tanner is able to contact the spirits in the house, and they are angry and deceptive. 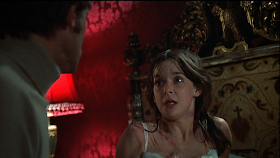 Violent episodes follow, and Barrett is almost killed.  Both Tanner and Ann become possessed and turn into seductive vixens.  Barrett maintains his new invention, an electroplasmic reverser (...I want one!) will be able to cleanse the mansion of evil.  Tanner and Fischer are appalled...a scientific machine in a paranormal investigation? Never!  As the team members are bruised and scarred, evil forces go in for the kill. Vicious black cats, possessions, violent ghosts, Ann's sex drive, and dissension among the team seem to indicate no one will survive.  But wait. Fischer who has experience in this house, has begun putting two and two together and just might have an answer.  Is it too late?  Will Barrett's adherence to scientific measures prevent him from listening to Fischer's theories? Is Ann's proclivity to sexual sadism a statement on her boring husband's ability to satisfy her? 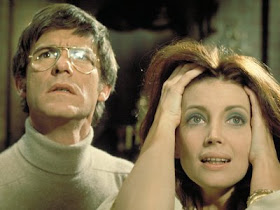 This is a good one, and will have lots of scenes that make you jump.  The acting is superb, and so is the direction by John Hough.  The conclusion is shocking and will surprise you.  Richard Matheson obviously did not follow a standard script when he wrote this story.  Netflix has a PG rating on "The Legend of Hell House," but it should be Rated R as there is nudity and gore here (Yes!!!).
Christopher Zisi at 5:29 AM
Share