Ahhhh, the perils of being in a satanic cult.  Yeah, there are lots of stupid people just waiting to have their babies kidnapped for sacrifice, or having their hearts ripped out on an altar, or even willing to sell their souls.  However, there is a risk of running up against someone who actually has brains.  In 2014's "Kristy," a vicious cult, preying on over-privileged young women, chooses the wrong victim. Like the New York Jets, this cult is gonna wish it had better scouting. 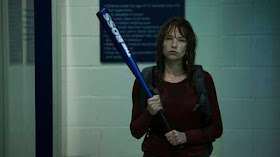 Justine (Haley Bennett) is the only student hanging back at the dorm during Thanksgiving break.  She doesn't have the money to go home and needs to complete her financial aid forms and study.  Borrowing her room-mate's BMW, she heads to a convenience store for Mountain Dew and snacks.  There she meets Violet (Ashley Greene).  Uh-oh, Violet and three hooded fiends choose weak women to abduct and carve up.  This cult calls their victims, Kristy.  They see their young lady victims as weak and of undeserved blessings.  After an unpleasant confrontation, the cult follows Justine back to the dorm where they kill off the security staff and engage in a hunt.  Of course the cult jams the wi-fi, cuts the phone lines, and all other means of communication with the outside world.

The hunt is on!  Violet and her thugs are not used to their  "Susie Debutante" victims fighting back.  But Justine is not that.  She is smart and feisty.  She is a competitive swimmer and a chemistry whiz. She has a jock BF, but values her independence.  At first she is terrified, but when some really decent folks are sliced up....well....Justine gets ticked off.  As the cult, armed with long knives, tire-irons, and satanic allegiances step up their pursuit, Justine begins her own hunt.  Not as well armed, except in the brains department, Justine intends to wreak her own havoc on the evil quartet. 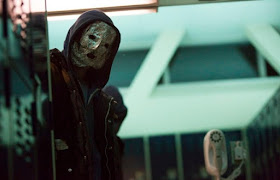 Will Justine's voyage into homicidal aggressiveness change her from a chemistry major to a political science major?  Is it possible to feel sympathy for a satanic cult?  Are these four fiends all that Justine needs to worry about?  The acting is terrific and so is Oliver Blackburn's direction.  This is a great modern slasher film for those awaiting their Thanksgiving breaks from college.  See "Kristy," which is available on Netflix.