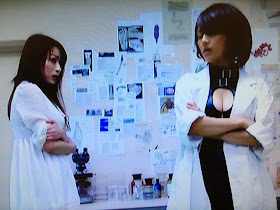 As our story begins, Japanese babes are being turned into hyper-nymphomaniacs who rape any man they can find.  Our alluring vet, Suzune, knows why and she seeks to stop this scourge.  The women are infected with a parasite, and Suzune usually arrives and is able to save them by pulling it out of their {CENSORED}.  With the help of Kyoko, a babe Suzune saved, she discovers the main source of the parasites.  An anti-aging supplement is the culprit, and Suzune focuses her investigation to the medical research company that distributes the capsules.  Suzune has two allies: A frog that eats parasites, which she carries on a thigh-holster, and a mysterious hunk who also seems to share her goal. 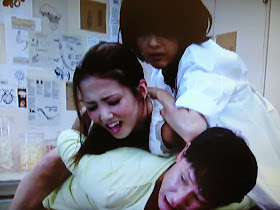 Through flashbacks we see that Suzune lost her father when she was a young girl.  As Suzune gets closer to the evil supplement company, our sexy vet realizes her father may be making the parasites...but could he still be alive?  As more Japanese women are turned into hyper-vixens, Suzune makes a move for the secret laboratory.  Uh-oh....evil forces are waiting for her.  What do the mad-scientists have planned for Suzune?  What secrets from her childhood will rush back to haunt our dear vet?  If Suzune doesn't succeed, her fate will be one of horrific violation (see picture below). 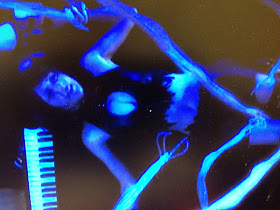 This story is taken out of a Japanese comic book and is fast paced and appeals to our basest interests.  Suzune is capable and sexy, but also haunted by a mysterious past.  This film has a sequel, and Rei Yoshii plays the beautiful heroine well.  The best sexploitation films of the 21st century are emanating from Japan, and for this we owe much gratitude to our Asian allies.  Both this film and it's sequel are reasonably priced on Amazon.com.
Christopher Zisi at 4:01 AM
Share