'Gator Bait, Another Tragic End for a Playboy Playmate

From the Drive-In Exploitation Hall of Fame comes 1974's "'Gator Bait."  This film stars the 1970 Playmate of the Year, Claudia Jennings.  Jennings almost made it as a TV icon, but Shelley Hack barely beat her out as Kate Jackson's replacement in "Charley's Angels." After two perilous relationships with the wrong guys, Jennings appeared to be on her way to being a mainstream actress.  This was not to be, unfortunately.  In October of 1979, she fell asleep at the wheel of her VW convertible in Malibu, resulting in her death at the age of 29.  The next year, another Playboy Playmate, Dorothy Stratten would also suffer a violent and untimely death (see my entry on "Galaxina" from July 23rd). 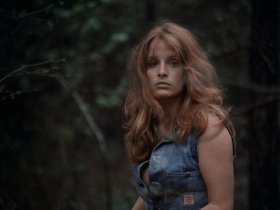 The temptation to label "Gator Bait" as a hybrid of 1978's "I Spit on Your Grave" and 1981's "Southern Comfort" (both films have received critical acclaim over the past 30 years) should be avoided.  In actuality, "'Gator Bait" pre-dated both those films, and influenced their creation.  In this bloody revenge tale, Desiree (Jennings) is spied on by Deputy Billy Boy (Clyde Ventura) and Ben.  Their plan is to rape her, but when they see her poaching alligators, they chase her in their swamp boat.  Hers is faster, but during the pursuit, Billy Boy accidentally shoots Ben in the head.  Not wanting to get into trouble, Billy Boy frames Desiree, and now Billy Boy's sheriff father, and Ben's family hunts her down.  Ben's family, real swamp rednecks, are a prize and a half.  When they are introduced, Ben's brother is trying to rape his sister, much to the sister's glee.  The Sheriff, Billy Boy, and the Bracken family then board two swamp boats and venture deep into the swamps to exact justice on the innocent Desiree. 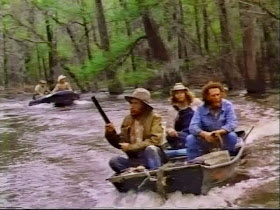 Our posse arrives at Desiree's swamp home, but she isn't there. Unfortunately for Desiree's beautiful and pure sister, Julie (Janit Baldwin), and mute little brother, they are home.  The posse then gang rapes Julie and put a shotgun barrel...well...I am not going to say where they stuck it, but Julie is killed when the trigger is pulled.  Desiree makes up her mind that she will hunt the men down and exact swamp justice on them.  The posse returns and believe they are chasing Desiree.  They soon figure out that Desiree is luring them deeper into this swamp to inflict slow tortuous deaths upon them.  With snakes, 'gators, booby-traps, and bullets, Desiree picks them off one at a time. 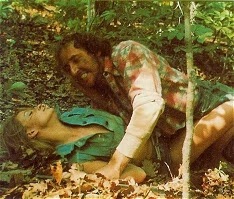 Will Desiree be able to finish her vendetta before the Bracken family turns the tables on her?  Will the Cajun-Redneck community ever shake the harmful stereotypes perpetuated by this film?  This movie is gritty and serious, with much uncomfortable imagery.  One may try to find deeper meaning in this film by portraying Desiree as a metaphor for the swamp.....endangered.  Which ever way this film is looked at, it's influence in future revenge flicks can be easily detected, including both "I Spit on Your Grave" films.
Christopher Zisi at 6:14 AM
Share