Death Ship, .and the Bloodiest Shower Scene Ever!

For the first time in almost three months, we will look at a horror film, set in the Atlantic Ocean, and starring George Kennedy (see my entry on "Uninvited" from June 27th).  1980's "Death Ship" is a creepy and atmospheric ghost tale which features the bloodiest shower scene ever put on celluloid.  Capitalizing on the popularity of "The Love Boat," our film begins on a cruise ship captained by a very grouchy George Kennedy, who is sick of dining with blue haired old ladies.  Listed sixth in the credits is Victoria Burgoyne (an English actress most famous for her role in the "Dr. Who" TV show), who dies the goriest death while showering (see picture below). 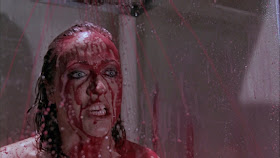 Lets face it, if we are watching a masquerade party on a cruise ship, something bad is about to happen. Cpt. Ashland (Kennedy) is only attending because he is avoiding the over-55 gala.  This is his last voyage before he hands the ship over to Marshall (Richard Crenna), who doesn't mind dancing with blue-hairs.  Somewhere nearby is a gigantic black freighter.  This freighter charges the cruise ship and sinks her.  In a makeshift lifeboat, Marshall, his wife (Sally Anne Hawes), his two really annoying, snot-nosed children, a lunatic blue-hair (Kate Reid), a skank (Burgoyne), the purser (Nick Mancuso), and the entertainment director (Saul Rubinek).  Then out of nowhere, Cpt. Ashland rises to the surface in an unconscious state.  In the middle of the Atlantic, hopes for rescue are slim.  Then, very mysteriously, appears this big freighter...seemingly deserted and derelict.  Our castaways climb aboard and immediately are beset by macabre events.  Mercifully, the annoying cruise director is eerily tangled in a rope and thrown overboard...and drowned.  No one is too broken up about this, as his jokes were never funny. 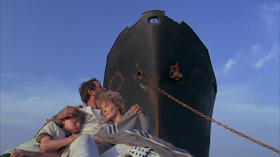 Unknown to the rest of the castaways, Cpt. Ashland becomes possessed by the ship.  This ship has 1940s decor (including a Betty Grable pin-up), and all the signs are written in German.  Apparently this ship roams the Atlantic, trapping sailors on board, torturing them, and using their blood to power the engines.  After the annoying blue-hair eats some 1940s mints and becomes deformed, Cpt. Ashland strangles her, stating, "At least she won't be a pain anymore."  The ship appears to be reading their minds, shutting down all means of escape, including the lifeboats.  With no apparent means of escape, Lori and the purser decide to take a shower together (...why not?), with bloody results.  As Cpt. Ashland falls deeper under the control of the evil spirits controlling this vessel, Marshall and his family need to look for other ways off the vessel.  Their search uncovers meat lockers full of dead bodies and torture devices.  Meanwhile, our possessed captain finds a rifle and begins hunting down the Marshall family. 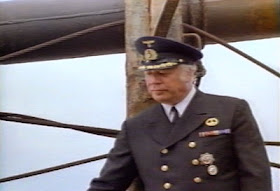 Will the Marshalls' escape this evil ship?  Will Cpt. Ashland shake free of the evil spirits?  Is the shower scene a morality statement....displaying the down-side of pre-marital sex?  This film, including the shower scene, is available on YouTube.  The derelict ship is creepy, and a perfect setting for a ghost story.  If the characters of "The Love Boat" annoyed you, watch this film and imagine it is them who are meeting the gory deaths before your eyes.