The Magic Sword, Dungeons and Dragons is Born...

As geeky as they are, "Dungeons & Dragons" players grow up to rule the world.  Compare them to "Fantasy Football" participants, whose employers encourage them to opt for early retirement plans.  In 1962, Bert I. Gordon (B Movie Hall of Fame inductee and creator of "Empire of the Ants" and "Food of the Gods") produced, directed, wrote, and created the special f/x for "The Magic Sword."  Set in medieval times, and sure to be loved by the D&D crowd, this film boasts of an all-star cast including Basil Rathbone (pictured below) as the evil Lodac, and Gary Lockwood (2001: A Space Odyssey) as our hero, Sir George. 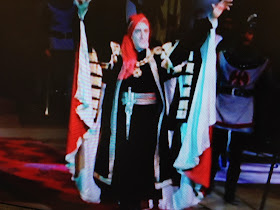 The plot: Sir George, a 20 year old medieval-geek, is accessing the HAL 9000...er..actually his magic pond.  In the pond he can watch an image of the fair-Princess Helene (Anne Helm) skinny-dip (Helene's privacy concerns are not relevant to the drooling George).  He falls in love with her and then sees her kidnapped by the evil sorcerer, Lodac.  The King promises Helene's hand in marriage to any knight who rescues her.  Sir Brandon (who is secretly in cahoots with Lodac) takes up the challenge.  George, whose mother is a good sorceress (Estelle Winwood), arms himself with magic armor, a magic sword, and seven brave knights in order to rescue the first woman he ever saw naked.  This bunch must battle Lodac's seven curses and a plotting Sir Brandon.  Meanwhile, the fair-Princess is locked in Lodac's dungeon with two other beautiful blondes (daughters of other kings) who, unfortunately, are then fed to the pet dragon.  Battling witches, giant ogres, acidic swamps, and Sir Brandon, George makes it to the castle.  Inexperienced George must now battle Lodac, Brandon, more curses, and a very menacing dragon in order to save the woman he obsesses over (restraining orders were non-existent in medieval times). 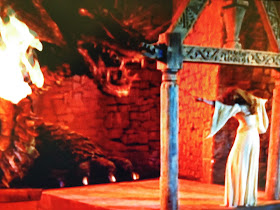 This film succeeds on so many levels.  The stunning Anne Helm is perfect as the proverbial damsel-in-distress, always clad in white (except when swimming).  The dragon is very scary.  Lodac, the villain, will have you hissing.  Finally, the ending is epic, and you will not feel cheated.  While you watch the Super Bowl tomorrow, some geek will be watching "The Magic Sword."  Like a medieval sorcerer...this geek will someday have total power over you.  Unless you want to be a dragon's entree, be nice to the geeks.
Christopher Zisi at 5:36 AM
Share