The Horror of Party Beach, Whatever Happened to All the Babes in Connecticut?

....they all got ripped to pieces by radioactive sea-monsters.  In 1964's "The Horror of Party Beach," Del Tenney (Producer and Director) tells this story in which the 30 most beautiful women in Connecticut meet the most horrible fates.  A relative asked Mr. Tenney, who died last February, how he could make such a horrible movie, he replied, "I cry all the way to the bank."  There is a lot of jiggling to rock 'n roll in this movie, which supplies over-the-top gore and bikini clad victims. 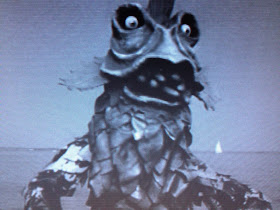 The plot:  Minutes after radioactive waste is dumped into the Long Island Sound, it mixes with human skeletons in a shipwreck.  The skeletons then become monsters (above picture).  Lots of teen-aged beach goers clad in swimsuits are partying on a Connecticut beach, and Hank (John Scott) and Tina have a tiff.  Tina swims out to some rocks and is graphically ripped apart by a creature.  Tina's best friend Elaine (Alice Lyon) helps Hank mourn her death (see below picture).  The two are grief stricken, so they go slow dancing and never mention Tina again.  Meanwhile, our creature friends crash a slumber party of pillow-fighting girls, and rip most of them apart and carry off the others.  Why some of the girls are carried off, and not shredded, is not explained but if you have seen enough Roger Corman movies, you can probably hazard a pretty accurate guess.  The monsters then attack three beautiful stranded motorists with annoying NY accents.  Fortunately, this crime scene yields an arm of one of the creatures, and Dr. Gavin (who should have won a Nobel Prize in 1964, and is Elaine's dad) is able to figure out how to track the things and kill them. 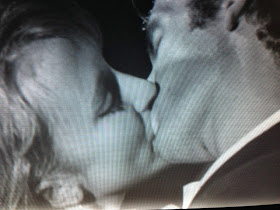 Hank, Elaine, and Dr. Gavin then go off in three separate directions to find the lair of the creatures.  Of course, B Movies cry out for a the proverbial "Damsel in Distress," and Elaine literally stumbles onto it.  Will Hank and the good doctor arrive in time to rescue her?  Will anyone erect a memorial to...eh...what's her name...., ah yes...Tina?  Will the Connecticut coastline ever regain it's reputation as the Malibu of the East?  This is a B Movie classic.  Gore, girls, and rock 'n roll...just try to tell me that "12 Years a Slave" is a better movie than "The Horror of Party Beach."
Christopher Zisi at 4:23 AM
Share