I first saw 1970's "Count Yorga, Vampire" at a drive-in movie theater in West Roxbury, Massachusetts, along with "She Beast" and "The Abominable Dr. Phibes."  It would be almost a decade before I summoned up enough courage to watch another horror movie.  There were three scenes in this film that had me screaming and hiding on the floor of my parent's car (I was only six).  Directed by the late Bob Kelljan (Charlie's Angels and Starsky and Hutch), and starring Robert Quarry, this movie will give the kids nightmares. 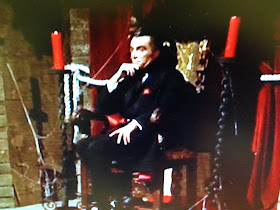 The plot:  Count Yorga, in his coffin, arrives by ship in Los Angeles, from Bulgaria.  He is first seen conducting a seance with two young couples.  Donna, one of the gals seeks to contact her recently deceased mother.  Little does Donna know, her dead mom is now one of Yorga's undead brides (he has two).  The seance is unsuccessful, but Yorga is able to hypnotize Donna, for later use.  Meanwhile, Erica and Paul get their van stuck driving away from Yorga's place.  During the night, Yorga knocks out Paul and bites Erica. Later that day, Erica displays some mildly anti-social behavior...such as trashing her apartment, displaying a desire to be dead, and eating her pet cat (see picture below).  Worried, Paul calls the promiscuous and boring Dr. Jim Hayes.  A Van Helsing wannabe, the dullard gives the lovely Erica a blood transfusion, and calls the cops (who laugh at him).  Later that night, Yorga pays the seductive Erica another visit and completes his task of changing her into one of his undead brides. 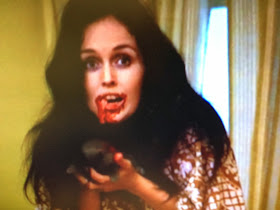 To be fair, L.A. is not Bulgaria, and Yorga gets a fast lesson on that.  His first two brides are very voluptuous, however, when they wake for the first time in their undead state, they turn out to be lesbians, more interested in each other, than Yorga.  With Erica gone, Donna, the two husbands, and the boring Dr. Jim Hayes head to Yorga's mansion. The plan: bore Count Yorga to death (I'm not kidding).  When this doesn't work, the team returns the next night with wooden stakes, setting up a terrifying conclusion. 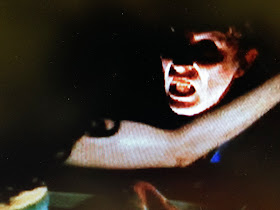 Count Yorga comes across as a horrifying and sympathetic figure.  He is polite, classy, elegant, exotic, interesting, and very lonely in L.A.  If he wasn't so evil and ominous, we might have been pulling for him.  Judy Lang portrays Erica, and she is quite captivating on the screen.  If you can, see "Count Yorga, Vampire" on a large screen with a quality sound system...and get ready for some sleepless nights.
Christopher Zisi at 4:20 AM
Share