Later this week I board an international flight that will take me to Europe.  I am fairly confident that none of the stewardesses (...excuse me....flight attendants) will have any resemblance to Ursula Andress.  Glamour and the modern day flight attendant are no longer companions.  Many of us long for the day of stewardesses like Jacqueline Bisset (Airport), Lee Grant (Airport '77) or Heidi Lenhart (Crocodile 2: Death Swamp).  Hence, Loaded Guns (1975) portrays a glamorous, international air hostess involved in dangerous intrigue in Naples. 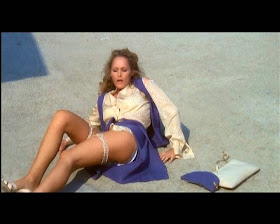 The plot: As the film begins, beautiful stewardess, Nora Green (Andress) departs her flight on a runway in Naples.  On the way to the terminal, she is approached by a mysterious man, whose face we never see.  He asks her to deliver a letter to someone in Naples (who ends up being a slimy crime lord) for $100.  She agrees.  Clad in a glamorous stewardess uniform she finds the Naples address of this crime lord and delivers the letter. Unfortunately for our heroine, his henchmen are also there and demand to know who gave her the letter.  When Nora tells them that she doesn't know, the henchmen beat her up unmercifully and then pick her half unconscious body off the floor and throw her about 20 feet onto the pavement.

Nora, bruised and bloodied is helped to an apartment of a good Samaritan.  Her uniform is torn and she is nursed back to health and beauty by this guy.  Instead of cowering, and getting out of town, Nora decides to exact revenge.  Her revenge will eventually pit her against three criminal organizations.  She is aided, only a little, by the police and a guy masquerading as a priest.
Of course, Nora prevails.  The chase and fight scenes are corny, but lets face it, Ursula Andress owns the screen.  Whenever one of the organizations makes a move to take her out, she just happens to be in some state of under-dress.  The most interesting instance of this is when an assassin  sneaks into her hotel room while she is taking a bath.  Nora pops out of the bath tub and does away with the would be assassin armed with only a radio.  Classic! 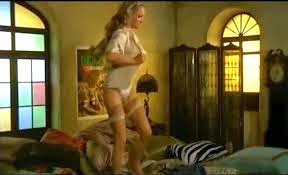 I apologize for painting modern day flight attendants with a broad brush.  In fairness, Korean Airlines and several other Asian carriers do not fit my stereotype.  This movie is fun, and unfortunately hard to find.  Andress was 39 when this movie was released and she looks a lot better than an of today's 20-something actresses.