Doomsday, The Sequel to Braveheart

I know most of you saw Mel Gibson's "Braveheart", but to fully appreciate the conflicts between Scotland and England, one must also have seen "Doomsday" (2008).  Many would ignore the comparison to Braveheart and instead compare this film to Mel Gibson's "Road Warrior".  Either way, this is a fine movie which stars two of my favorites, Rhona Mitra as Major Eden Sinclair and Malcolm McDowell as the insane Dr. Kane. 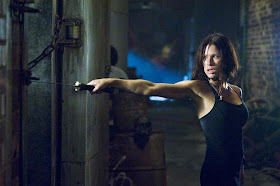 The plot: 25 years ago a plague hits Scotland.  Plague victims die quick, incredibly tortuous deaths.  As the plague moves toward England, the English government realizes there is no time to find a cure before the plague hits.  England quickly erects an 18 mile wall from sea to sea, walling off Scotland.  A few days later, all of Scotland is dead (so they assume).  In the last airlift out of Scotland, a five- year-old Eden Sinclair gets a seat on the helicopter, but not before her eye is shot out.
Present day, Major Eden Sinclair heads an elite police unit.  She has a prosthetic eye which she can remove.  This eye acts as a video camera, and she can roll it down hallways to see what the bad guys are up too.  So cool!!!!  Bad news....the plague is now turning up in England.  In two days, it will be out of control.  Sinclair and her team are sent to Scotland (no one has gone over the wall in 25 years) to find the notes of Dr. Kane, who was the doctor researching a cure before the wall was built. 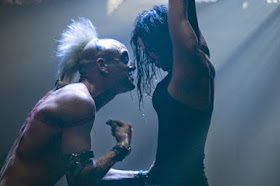 Once in Dr. Kane's lab, Sinclair and her team meet scores of survivors....and they are ticked!  The English forgot about them 25 years ago, and they are more interested in eating Sinclair and her team than helping.  After battling these survivors and escaping from them, Sinclair, to her surprise, finds another group of irate  survivors headed by the mad Dr. Kane.  The clock is ticking, can Sinclair save England?

This is a terrific action-filled movie with big time chase and battle scenes.  The survivors remind us of  the bad guys in The Road Warrior.  Mitra's performance is captivating as a haunted, tough, and bad a** Major of Scottish lineage, who is entrusted to save England.  The sets depicting Glasgow 25 years after the plague are frightening.  See this movie!