Straight out of the 1960s.  We have beatnik artist types.  More important, we have bikini clad babes, underwear clad babes, formal wear clad babes, and naked babes.  Don't get attached to any of them, they'll all die horribly.  Then we have a vampire...maybe.  In what ends up as a brutal and shocking horror film with a lot of cheese and gore, we have a Roger Corman-like film in 1966's "Track of the Vampire" (aka "Blood Bath"), directed by Jack Hill and Stephanie Rothman...and with a cameo by Corman.

Antonio Sardi (William Campbell) is a highly sought after artist.  Weird guy.  His studio is in a bell tower of an old church and he paints beautiful women in the agony of death.  His genre is labeled "Dead Red Nudes."  Models flock to him.  After a couple of babes have been murdered by a vampire in some erotic scenes, Daisy (Marissa Mathes) pleads with Antonio to paint her.  She even sheds all her clothes before being asked to.  Mistake.  Antonio murders her and paints her.  Two other babes of note, sultry ballet dancer Dorean (Lori Saunders) and Donna (Sandra Knight).  Dorean is a babe who prances around in a bikini the whole film and is really loved by Antonio.  Donna is Daisy's sister who investigates her disappearance and now follows Antonio. 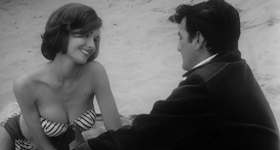 The vampire hangs out at the beach and pool parties.  He finds babes, drags them in the water, undresses them, and bites their necks.  Is this vampire Antonio?  Maybe.  Antonio's ancestors were burned at the stake for similar anti-social behavior.  There also appears to be a vixen from centuries ago that he is trying to resurrect.  Strippers, models, and bikini babes will all fall in gruesome fashion as Antonio keeps putting out his Dead Red Nudes. Now Antonio is really falling in love with Dorean, who fills out a bikini like no other woman.  Uh oh for Antonio...Donna is smart and suspects him of her sister's disappearance. 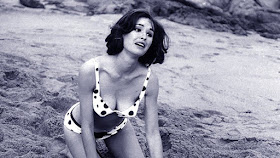 Is Antonio the vampire?  Why is Antonio murdering these babes?  Is this film a metaphor for the ultimate track of the hippie/beatnik existence, which is death?  The cheese factor in this film is superb. Sadly, the babes will all die horribly.  For a neat 1960s horror flick incorporating the beatnik scene, see "Track of the Vampire."
Christopher Zisi at 5:07 AM
Share