Okay...yep...think of this as "Lambada: The Forbidden Dance" Russian style.  Perhaps a Putin-ized version of "Flashdance."  Maybe a Stalin-ized version of "Footloose."  I know, don't the Russians have enough to do right now in The Ukraine to worry about recreating "Lambada:  The Forbidden Dance"? Maybe.  Give them credit, though.  They took that monstrosity of a dance film and threw in a post-apocalyptic Moscow, nuclear storms, mutants, and even weirder dancing.  Today we look at, from Russia, 2017's "Dance to Death," directed by Andrey Volgin.

Nuclear war has destroyed the world.  In post-apocalyptic Moscow, survivors are scavengers constantly dodging nuclear storms that can disintegrate one if caught in it.  Kostya (Ivan Zhvakin) is a handsome, non-mutated thief.  Uh oh!  A ruling class, living in an underground bunker, free from radiation, and hording fresh fruit, have their eyes on him.  They eventually abduct him to...dance.  Dance to the death, in fact.  See, young babes and hunks are abducted and forced to sacrifice their lives in the dance ring.  They must dance against an opponent...the winner lives...the loser is vaporized.  At the end, there can be only one. 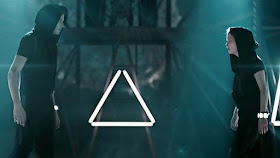 As for the opponents, we have Russian babe Anna (Lukerya Ilyashenko)...and we just know her and Kostya will meet in the finals.  Of course they fall in love before that.  Yes...I am leaving out so much.  The loser of the dance has his or her lifeforce sucked out and given to Mother Earth so she can repair herself...hence, the losers are seen as heroes who have sacrificed themselves to save the planet.  The dance-offs are underway and Kostya and Anna keep winning and it really looks like they will meet in the finals.  The winner will be allowed to join the ruling class.  Uh oh, again.  So much more is going on and the ruling class is not as entrenched as it might have seemed.  Now treachery enters the competition and more cheating than in Major League Baseball will ensue.  Now Kostya and Anna, no matter how good they are, may be marked for death even before the finals or even before they have pre-marital sex. 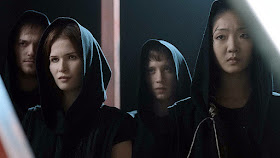 Is it true that awful reviews of this film appearing in Kiev newspapers were the real cause of the Russian invasion of The Ukraine?  Will Anna be clad in a skimpy, lingerie-type costume in her dance or one more suitable for post-apocalyptic Moscow?  This is...well...an ambitious film with a grim post-apocalyptic feel to it.  For some great dancing (okay, that may be overstating it) and nuclear fall-out dread, see "Dance to Death."