Nothing says HP Lovecraft better than a tentacled creature emanating from other dimensions associated with our deep subconscious.  Important part there...tentacled creature.  We have one in this film...a gooey and drippy thing with jaws and appendages that can impale or cut.  Perhaps a metaphor for western civilizations trend toward a Bohemian social experimentation that is sucked down a vortex of carnal impurities.  Okay, that last sentence was merely to show you all I can use ten dollar words.  Today we look at 2021's "Dark Ritual," directed by Chris Warren. 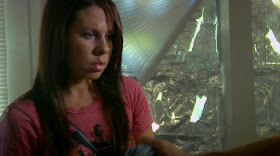 As our film begins Jennifer (Natali Jones) seems hopelessly insane under the care of the sultry Dr. Katya (Debbie Rochon).  What happened?  Well, here it is.  As children, Jen and her brother Brian (Sean Brison) were witness to something horrific.  Now both are college grads and Brian is doing post-graduate work in some anthropological field of study concerning Mayans.  Before you yawn, Brian goes missing, or pulled into another dimension by the aforementioned slimy tentacled creature.  Now Jen is called to the house and seeks to find Brian.  This search won't go well as apparitions from the other side, claiming to be Brian, manifest.  These things look like half-eaten Brian and soon become menacing, beckoning Jen to come on over to the other side.

Got it?  Good.  Whatever Mayan deity that was awakened has taken over the house Brian went missing from.  The house is part of the creature.  Jen is able to find clues to all these goings on by the television.  Brian's last moments appear on the TV and Jen sees what happened.  Now Jen has a weird idea...not a good one...but she must have seen the movie "Poltergeist."  Now Jen is hunted by this creature.  Her only desire is to free Brian from its clutches.  In the mean time, the thing munches on Brian's and Jen's friends...some naked at the time. 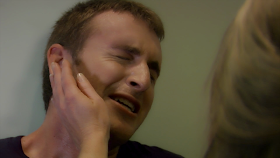