Okay...a genetically engineered wolf murdering tons of folks.  A film directed by Fred Olen Ray...so who are the victims?  Why not a bikini babe in the wilderness being shot for a calendar?  Gratuitous cheesecake in horror movies is always a good thing and Mr. Ray delivers.  Thank you Summer Harlow for some nice cheese before getting your organs ripped out and eaten...so sad, but also so satisfying. Mad scientists, babe scientists, a sheriff reminiscent of "Rain Man," a hunk game warden, and more babes in much peril...oh yes...blood and guts to the max...and a great creature!  Today we look at 2009's "Dire Wolf." 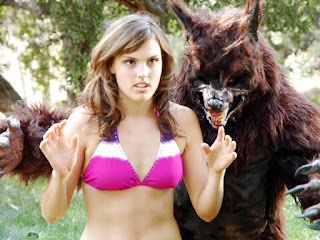 The aforementioned monster escapes from his cryogenic tank at a secret military lab near a sleepy California town.  This bad news is immediate for sultry scientist (Amanda Krzys) as her and a couple security guards are shredded by the thing.  Now the wolf monster heads to Sheriff Parker's (Maxwell Caulfield) town.  Parker reminds his townsfolk of Rain Man and he can really arrange pens and pads on his desk.  His son, the hunk game warden Jim (Blake Cooper Griffin) is smarting after being dumped by the nubile Amber (Kimberly Horner).  Oh yes, Gil Gerard, playing a general, sends two secret agents (John L. Curtis and Kristen Howe) to recover the experiment alive.  But wait!  One babe scientist not harmed is Tina (Dawn Ann Billings), who seems psychically connected to the thing.

The wolf thing starts murdering townsfolk...fishermen...Amanda's new beau...rednecks...government types...and sadly, the aforementioned bikini babe.  The creature loves leaving his victims with their ribcage exposed and organs lacking.  The blood will spurt and splatter like you have never seen before.  We really feel for this bikini model as the wolf looked like it was contemplating raping her, too.  Anyway, as Sheriff Parker plans on detailing his police cruiser and polishing his badge, Jim frantically heads into the woods to rescue Amber with the government spooks in tow. 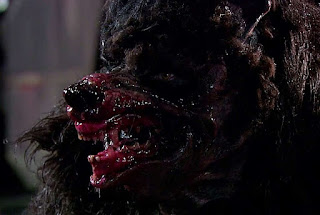 Despite the escape of their genetically engineered creature, will our government claim the experiments need to continue because Putin hid weapons of mass destruction in The Ukraine?  Is an out of control government project raping and disemboweling a nubile bikini babe an obvious metaphor for how our government has waged war on everything good and pure about our country?  Will Summer Harlow's disembowelment put an end to our chance at getting her calendar?   Bloody with lots of cheese, "Dire Wolf" needs to move to the front of your "To See" movie queue.