A year before the epic and terrifying "Terror at Bigfoot Pond," another New Mexico horror movie was made.  Sort of a bargain basement version of "Friday the 13th," 2019's "Death Rink" traded in a summer camp for a roller skating rink.  With a great cast of hunks and babes, and unique methods of murder, our feature today is a lot of fun and will light a fire within you to visit New Mexico.  Directed by Daniel Zubiate, with plot devices fresh from Roswell, this is a goodie. 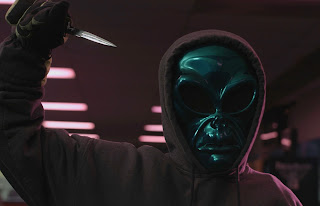 Roller King roller-skating rink is closing for the night.  The crew still has a few hours of work to do to clean it and get it ready for tomorrow.  Rachel (Katheryn McCune) is the boss over a crew of teen-agers and immature adults.  Mike (Alan Humphrey) is her security guy and he is uneasy about something.  Oh!  A weird guy keeps calling the alley and screaming "Satan!" into the phone.  Daley (Robert Posey) and French (Caedmon Holland) are her two adult workers...all they think about is pre-marital sex with any woman within 50 miles.  The babes are the three teenagers...who bicker and swear a lot.  Wendy (Meg Smith) is the blonde, Cara (Kim Johnson) operates the snack stand, and Alicia (Amanda Courtney) is Wendy's arch enemy...especially when it comes to stealing boyfriends. 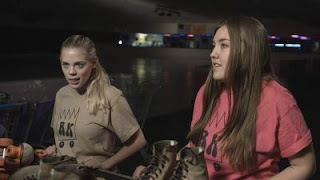 Eventually, the murders begin.  Someone with an alien mask (probably a souvenir from Roswell) has descended upon the rink.  One by one he goes after the babes and hunks.  The strength of this film is the bickering between Wendy and Alicia and also the methods of the kills.  As blood and ketchup mix, the killer seems to have the advantage.  One by one the employees fall, and sex partners for French and Daley get to be an endangered species. 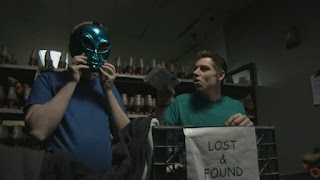 Is the weird caller the psycho-slasher, or is that too easy?  Is Wendy's and Alicia's feud over stolen beaus something that either one of them would murder over?  Is what is happening at this rink an experiment by an alien intelligence who is pulling all the strings from a government lab in Roswell?  Fun and low budget, "Death Rink" is a terrific film especially if you had to sit through "Moonfall."