Dawn of the Beast, Bigfoot vs. The Wendigo Mob

I'm still cheering.  This has got to be one of the best films I've ever seen.  Picture this.  A very grouchy and huge Sasquatch busting out some martial arts moves in a brawl with a gang of smart-aleck Wendigos!  Yes!  Babes, hunks, nerds and dismemberment.  Oh, yeah!  Possession.  Some "Evil Dead" action as a babe girlfriend becomes a demon thing.  Today we take a look at 2021's "Dawn of the Beast," directed by Bruce Wemple. 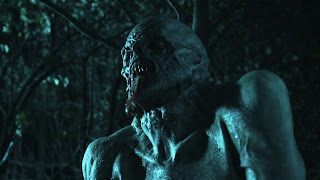 Two professor types bring a group of hunk and babe post-graduates into a northeastern forest to look for Bigfoot.  Also along for the ride is Chris (Adrian Burke), a nerd, who is the beau of cold-fish babe student Isabella (Ariella Mastroianni).  Throw in Lilly, a sultry bad girl who is quite blunt...we like her a lot.  Yes, there is also the useless jock, Jake (Chris Cimperman).  These saps don't know that 10 years ago, mountain man Everett (Grant Schumacher) watched his girlfriend Marie (Francesca Anderson) be ripped apart by Bigfoot...or did he?  The graduate class reached the proverbial cabin in the woods and Chris finds a demonic book foretelling of something a lot more ominous than Bigfoot. 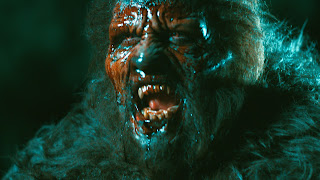 The attacks begin...but is it Bigfoot?  Isabella is possessed by a forest deity with antlers and becomes a cannibalistic no-longer-babe.  The profs are disemboweled or impaled.  Now the blunt Lilly takes command of the survivors.  Uh oh...a Wendigo clan wants to eat them all and surrounds the cabin.  Chris has hopes Isabella might come back to humanity, then realizes he never really liked her anyway...smart! Oh yes, Everett has plans to avenge Marie's disembowelment and it involves using Lilly for bait.  I'll stop here.  This film has so much and may rival "Crocodile 2: Death Swamp" as the best film ever made. 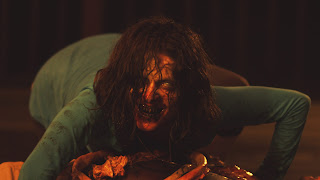 Will bad girl Lilly and nerd Chris overcome forest cryptids and engage in pre-marital sex?  Will there be a cat-fight between Lilly and the demon Isabella?  Does a ticked off Bigfoot stand a chance against a whole gang of Wendigos?  Monsters, beefcake, cheesecake, and attitude!  See "Dawn of the Beast," and forget about the new "Scream" monstrosity.