University professors, writers of dull fiction, and brilliant scientists are as relatable to us as monster worms from outer space.  On occasion it is nice to see a trailer park slut...or maybe other rednecks plying their trades. Sometimes it is nice to see a demolition derby instead of an opera...or eat beef jerky rather than anything organic... or watch a snuff film being made than the 'the making of' section of a superhero DVD. Today we delve into 2008's "Trailer Park of Terror," directed by Steven Goldmann. 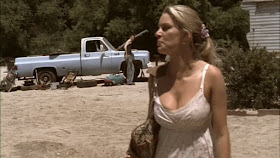 Norma (Nichole Hiltz) is a sultry trailer park slut.  She desires to meet a man from the other side of the tracks and leave the park to start her own life.  The trailer park denizens are possessive of their beauty and impale her clean-cut date when he arrives.  Norma is furious and sad and flees her home. A few miles down the road she meets the devil (Trace Adkins).  She and him make an unholy deal and Norma returns to the park with a sawed-off shotgun and murders all the park residents.  She then kills herself. Now the deal...she is back as a she-demon and so are her trailer park antagonists. Now she rules over them for eternity. Enter Pastor Lewis (Matthew Del Negro) and several at-risk teens.  Their bus breaks down on a stormy night and they all must seek refuge at the haunted trailer park. 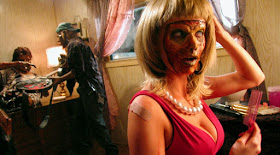 Norma meets and welcomes them. She is dressed for seduction and will eventually seduce Pastor Lewis...and then rip his head off.  China (Michelle Lee) also returns from the dead.  She was/is a homicidal Asian masseuse.  She'll also seduce and rip internal organs out of aroused at-risk teens.  Amber (Hayley Marie Norman) and Alex (Ryan Carnes) will quickly seek pre-marital sex and find themselves in a snuff production.  Yep, the kills will be quite gory and the ghost/demons of the trailer park denizens in their decomposing states will be very yummy. But wait...problem Goth Bridgit (Jeanette Brox) emerges as a teen with spunk and perhaps 'final girl' potential.  As her mates are sliced up for jerky, decapitated, disemboweled, or have their limbs sawed off...Bridgit survives bombs and traps and even survives a demolition derby to the death.  But will she survive to sunrise? 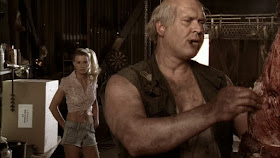 Will any of the at-risk teens survive the evil seduction or the mad butcher and escape the trailer park from Hell?  Is Norma cursed for all eternity to rule over the park she hated all throughout life? If the evil butcher made the teens into organic jerky, would the wine and brie crowd warm up to this film. For much gore and seduction (Ms. Hiltz is quite alluring), see "Trailer Park of Terror."