Bride of the Werewolf, The Mummy as the Best Man

The Werewolf! The Mummy! Dr. Frankenstein! Throw those fellows into the mix at a wedding and I may actually want to go to that wedding. Maybe. The Polonia Bros. Entertainment graces us with yet another fun and gory horror film. Directed by Mark Polonia, 2019's "Bride of the Werewolf" is our feature today. You can be certain this is a far superior film than the Sting/Jennifer Beals film, "The Bride." 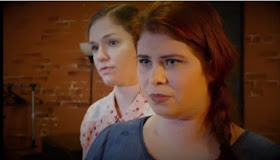 Dr. Stein (Tony Brown) is conducting his experiments at an Eastern European castle. Like many of us in our basement or attic labs, the mad-scientist is looking for the secrets of immortality. He believes the mummy he has in his possession will help him in this. Meanwhile three hunters are shredded by a werewolf (James Carolus) in nearby woods. On cue, Stein's beautiful niece, Sylvia (Mel Heflin), and her sultry pal Joan (Anna Tomic) come for a visit. The two gals want pre-marital sex with men so go into town to find it...they are not successful. They are warned not to go out at night as the woods are cursed. On their way back three thugs try to carjack and rape them. A mysterious savior and his crossbow saves them. They find refuge in the house of Saul (Jade Michael LaFont). 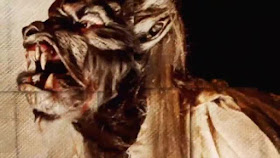 The gals are charmed by Saul. He has a housemate, the disfigured Miranda the Witch (Natalie Himmelberger). Soon the gals will find out Saul is a werewolf. When the thugs come back looking to rape the gals, Saul turns into a werewolf. The ensuing battle will be bloody and heartbreaking. Now Sylvia is really turned on. Like American men, I guess the pickings in eastern Europe are pretty neutered. The two will fall in love. Now Sylvia brings Saul to meet her uncle. She is confident he can cure his lycanthropy. Stein is ecstatic and confident he can help...and re-animate the mummy in his lab. How are they related? Just go with it. This film also has some brief but nice performances from old pal Jeff Kirkendall and Jamie Morgan. 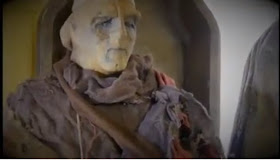 Is the werewolf a metaphor for eastern Europe's desire to make their men men again? Will Joan and Sylvia engage in a cat-fight for the werewolf's attentions? Does the mummy really need a smooth segue into the plot to be a worthwhile plot device? This one is a lot of fun, just as any Polonia Brothers film is. For a good time and some nice gore, see "Bride of the Werewolf."