Crawling around in poop and mud, always soaked from a cold rain, and monster parasites nipping at your heels. Yep, a metaphor for all of our existences...and also a pretty summary of the Irish film from 2005, "Isolation." When bovines misbehave, humans better watch out. Of course we can't blame the cows when a mad-scientist has induced the behavior. Directed by Billy O'Brien, "Isolation" is a gory one that will have you turning your eyes from the screen. 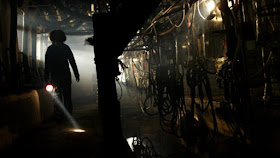 Mad-scientist John (Marcel Iures) has hired a farmer, Dan (John Lynch), to lend him his services and farm. He has an experiment and us using cows. The goal... to make cows extra fertile to produce a larger calf community and feed the world. This won't work. Pretty blonde veterinarian Orla (Essie Davis) arrives to help birth the calf and bad stuff begins happening. Orla reaches into the cow to pull out the calf and gets bitten. Oh yes, two losers, Jamie (Sean Harris) and Mary (Ruth Negga) are camped beside the farm. Late at night, Dan is alone at his farm and the cow goes into labor...he pleads with Jamie and Mary to give him a hand...bad idea. The cow is born after a vicious birth. Dan will be bitten too... more bad news.

As Dan and Orla get sicker, Orla arrives to do an autopsy of the cow and calf...yep, she euthanized them. Uh oh...the calf had five fetuses in her. But wait! The fetuses ore grotesque monsters and they are still alive. Now one of the fetuses begins exploring and attacking. Oh so say as Orla won't fare well. Now John the mad-scientist arrives and looks at blood samples. Whatever the monster fetus is, it is acting as a parasite, looking for warm places to crawl into (cow and human) and eat out the insides. Worse news, if it gets off the farm it will infect Ireland's cow population, birthing thousands of these creatures. Now Dan, Jamie, Mary, and John must find them and kill them...but they are also being hunted. 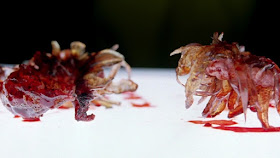 This is a muddy and cold film that you will feel the need for a hot shower after watching it. There are plenty of ick moments and the monsters are really scary. Is this film Ireland's attempt to warn the world against feeding bovine steroids and other junk to increase food supplies? Is it about time the cow community inflicted carnage against a monstrous human race that eats them? Should we become vegetarians or are our crops just as polluted and contaminated? This is a dark and uncomfortable film that is quite claustrophobic, but for a squirmy good time, enjoy "Isolation."
Christopher Zisi at 1:20 AM
Share