The Undead, Nubile Babes and Witchcraft

In what appears to be a predictable tale of witch trials in which nubile babes are put in much peril, Roger Corman throws in some neat twists to make this one...a little different. Most importantly, 1957's "The Undead" gives us some great 1950's cheesecake, more specifically, Allison Hayes and Pamela Duncan. These two beauties will be pitted against each other and we can only hope for a gratuitous cat-fight. The allure of the evil witch, Ms. Hayes, and the nubile lass, played by Miss Duncan, may be the highlight of this tale that becomes a complex tale of irony. 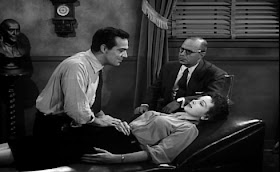 Streetwalker...okay, whore, Diana (Duncan) is picked up by mad-scientist Quintus (Val Dufour). He doesn't want sex, but pays her to...well...be hypnotized. The beauty lays on the couch and Quintus goes to work. After learning from Buddhist shamans, Quintus is able to send Diana back to a past life, where she was on trial for witchcraft. Arriving in the past, Diana is now the nubile Helene who is set to be executed. Now Diana is a voice in Helene's head and instructs her on how to escape. Using seduction, and she is quite capable of that, she escapes. 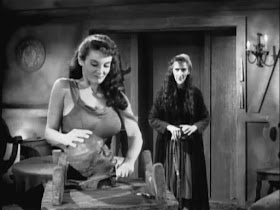 Now on the run, the very sultry Helene hides in a coffin...with its corpse. As the horse-drawn hearse starts moving, she and the corpse rapidly rub up against each other. Okay, enter Livia (Hayes), a knock-out of a witch . Livia needs Helene's head in order to gain Satan's favor...oh yes, he's in this (Richard Devon). But wait! Back in the 20th century, Quintus realizes his little experiment may change history and he follows Diane back to the 17th century. Now Quintus meets Livia and Satan and tries to collect Helene/Diana. But wait again! Helene's predicament has yielded some surprising dichotomies. The beautiful Helene has a choice to make and the results of her choice are steeped in irony. As Diana must choose between the man she loves and death, her choice won't be as easy it may seem. 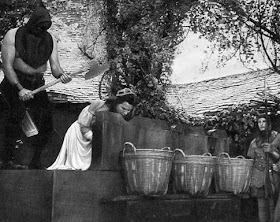 With the sultry Livia desiring Helene's head, and Helene desiring the love of a brave knight, the two babes are in store for some surprising twists. Will the twists faced by Helene and Livia still enable them to partake in a wild cat-fight? Is the life of a 20th century prostitute preferable to that of a 17th century beauty, slated to be executed for witchcraft? Is this film a Roger Corman sermon explaining the misogyny of the 20th century being just as profound as 17th century misogyny? This is a good one that gets quite complex. However complex, the allure of Ms. Duncan and Ms. Hayes will keep you glued to the silver screen. Enjoy Roger Corman's "The Undead."
Christopher Zisi at 6:09 AM
Share