Grotesque, Everyone Dies...or do they?

Donna Wilkes? All of us guys in our early to mid-fifties all developed a crush on her. Beset by a Great White in "Jaws 2," clad in tight short shorts...her shivering and intense fear seduced us as teenagers. We all pleaded to a higher power..."DON'T LET THAT FISH EAT HER!" She survived and us teenagers let out a loving sigh of relief. No such luck for the perky Ms. Wilkes in 1988's "Grotesque." So sad, the nubile Ms. Wilkes, clad in a white nightgown, will be chased, sexually molested, caressed by an insaniac mad-woman, and then gutted by the same mad-woman. Did I just reveal a spoiler? Maybe. 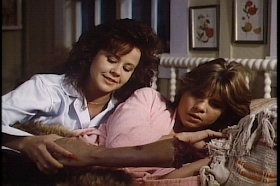 Lisa (Linda Blair) brings her buddy, Kathy (Wilkes) home, to a mountain cabin, to meet her family. Kathy has just been dumped by her BF and is sad. She will get sadder as a psychopathic biker gang led by Scratch (Brad Wilson) and his GF Shelly (Michelle Bensoussan) converge on the cabin. Lisa's dad (Guy Stockwell) is a Hollywood horror f/x guy and loves to do practical jokes. Oh yes, Lisa and her parents have a grotesque mutant monster hidden away in a secret room...I know, metaphorically, who doesn't? The gang hits with much violence and in heartbreaking manner, molest Kathy clad in a white nightgown and Shelly gropes her and guts her. Only Lisa will survive and she will run out into the snow and into the mountains. 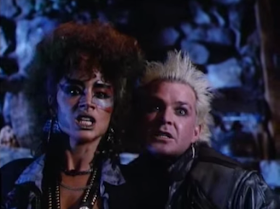 Gang member Ear Box (Billy Frank) will pursue. Accidentally, the fiend, Patrick (Robert Apisa) is turned loose and begins going through gang members like crap through a goose. Now the surviving gang bangers are on the run up the same mountain and Patrick follows. Patrick os...well...grotesque and has super human strength and snaps anyone he meets in half. Enter Rod (Tab Hunter). He's Lisa's uncle. He joins a posse looking for the criminals and Lisa. What they find will be horrific. No spoilers here but what emerges in the plot is so far out there you will wonder if you are watching the same movie. Rod decides to take revenge into his own hands and his methods will be shocking and include surgical tools. Oh yes the ending! Wow! Its one of those ending you will ask yourself, "wait, did that just happen?" 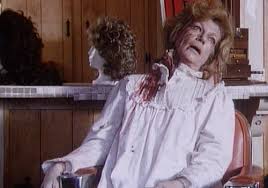 Just how can a movie -maker kill of Donna Wilkes in such cruel and humiliating fashion? What will be Linda Blair's fate as she runs up the snowy mountain clad in her pajamas? Tab Hunter...really? This is a quirky one with a plot that goes into unexpected directions. The gang members are all creepy and loud and we pray for their bloody demises as we sob at the demise of Donna Wilkes. For some unexpected chills and kills, see "Grotesque," directed by Joe Tornatore.
Christopher Zisi at 5:03 AM
Share