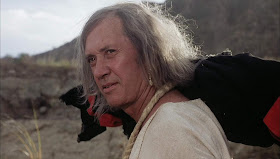 The evil William (Luke Askew) commands an evil army which roams the apocalyptic wasteland looking for water. After decimating a peaceful village yielding no water he learns of another peaceful village which has much H20.  His forces race there and occupy it. Everyone in the village is a dweeb coward except the sultry blonde Val (Jillian McWhirter). As the village elders are content on surrendering and begging for William's mercy, Val sneaks away to look for brave warriors...she finds them. Michael (David Carradine) who is a wise old tactician with a grudge against William. Fortunately for Val, who has a dweeb fiance, she finds Dorian (Blake Boyd)...a real man, and John (Rick Hill) who never wears a shirt, and the swarthy Ricardo (Dante Varona)...and the sultry Miranda (Maria Isabel Lopez). Val is uneasy around Maria as the female warrior is a woman of the world, but after skinny-dipping with her...well, everything is fine between them. 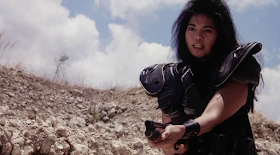 The warriors reach the village before William's return and train the dweeb men to be warriors. Miranda skinny-dips and has a lot of pre-marital sex and readies her sawed-off-shotgun. As William's forces approach, Dorian romanced Val and the two become fond of each other...very cute. Now some of the village elders, afraid of William's superior army, sabotage the warriors' efforts and conspire with William. Having to repel William's huge army with traitors in the ranks will be a herculean task for Michael and the warriors. As Miranda has more nude love scenes and Val falls in love while looking very concerned, a huge battle awaits. 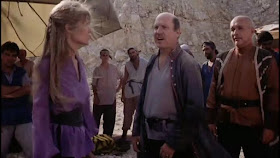 Can John sufficiently train the villagers to repel a force ten times their size? Will the steamy truce between Val and Miranda be preserved or will their be a cat-fight to end all cat-fights? Will the flamethrower or Katana swords be the deciding weapon, and can you guess which one David Carradine is going to use? This is a fun and gratuitous one and isn't as preachy as those 'Mad Max' films. For some great post-apocalyptic war action and gratuitous pre-marital sex, enjoy "Dune Warriors."
Christopher Zisi at 6:12 AM
Share