Oh so many car crashes! Cars crashing into cars...front ends...back ends. Cars flung through the air crashing on the tops of other cars, 18 wheelers, boats. Dozens! Police cars? There must be three dozen of those destroyed. Oh yes...the dog and the wheelchair...no spoilers here, watch 1976's "Crash!" to find out. Don't worry, this Charles Band film features a beautiful blonde damsel in much danger and her fate will be quite horrific.

As our story begins a blonde babe (Dawn Orr) and hunk (Rick Deming) driving a van are driven off the road by a mysterious black convertible sans driver. They both die in a massive conflagration. Okay, now sultry blonde Kim (Sue Lyon) buys an amulet at a flea market with the intent of gifting it to her crippled husband, Marc (Jose Ferrer). This won't go well. Eric is quite a bit older than the blonde beauty and resents her for an earlier accident that confined him to a wheelchair. Oh that's right! Sue Lyon was Lolita! No wonder she was a natural to play Jose Ferrer's wife. She likes playing tennis in alluring outfits and lounging around naked in her personal sauna. He rejects the gift and she takes it and drives off. Eric is a professor of the occult and puts a curse on Kim, hence his menacing doberman attacks her while she drives. This causes a big crash and Kim is cut up bad and burned. In a coma, and with amnesia, Kim clutches the amulet as she heals in a hospital bed. Meanwhile, the aforementioned black car goes on a rampage and murders dozens of cops and other Californians. Dr. Martin (John Ericson) falls in love with her, probably because babes with amnesia are so hot! He tries to find her real identity. Uh oh, knowing he didn't finish the job, Eric uses the black arts to try to kill Kim. Enter beautiful nurse Kathy (Leslie Parrish), who will save Kim's life. Uh oh for Eric, Kim's amulet protects her and now the forces of the occult are targeting Eric, as well. 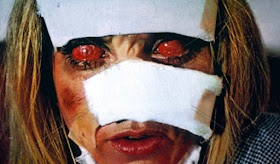 This film has very horrific images as Kim's broken and slashed body is quite gory after the crash. Her face is disfigured and the beautiful Sue Lyon will still appear as a sultry character in her portrayal of Kim. Also, when possessed, Kim's blood red eyes could give the squeamish among us nightmares. Who will fall to black magic first, Kim or Eric? Will Dr. Martin ever try to pick up a lady who has a memory and isn't confined to his care? Loser! Will the lovely Nurse Kathy prevail, or suffer the fate most beautiful nurses do in these horror films? For some 1970s gratuitous horror, take in the surprisingly grim and ominous "Crash!"
Christopher Zisi at 4:30 AM
Share