From executive producer Roger Corman we have a sequel to the epic apocalyptic horror story "The Terror Within." I know...who knew there was a sequel? However, when 'Bring Your Kids to Work Day' rolls around, Roger Corman delivers. Hence 1991's "The Terror Within II" stars Stella Stevens and her son Andrew Stevens  (he also directed and wrote this sequel). Okay, with mom on the set, do you think Andrew will include nubile apocalypse babes being raped by mutant monsters? Maybe Stella left the set for a few minutes to fix Andrew a grilled cheese sandwich. 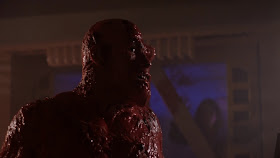 David (Andrew Stevens) is the only survivor of the Mojave Lab. Remember that lab? After the apocalypse, survivors in the lab were beset by mutant-gargoyle humanoids who raped the women scientists, who then gave birth to mutant gargoyle babies...very bloody. He sets his sights on the Rocky Mountain Lab. A virus has hit the this lab and the creatures are trying to get in. On his trek he meets the nubile Ariel (Clare Hoak). Her brother was just killed by a creature so David will have immediate pre-marital sex with her...and impregnate her. Uh oh, a religious cult steals Ariel and offers her up to the amorous gargoyle creature who proceeds to rape and impregnate her. 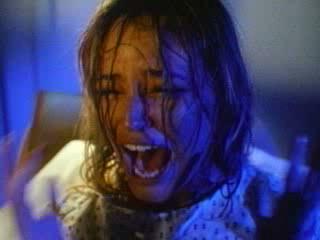 David rescues the apocalyptic rape victim and brings her to the underground lab. Meanwhile one of the creatures gets into the lab and so does another. Ariel's pregnancy is speedy and she gives birth to a mutant gargoyle thing...ick!  Now the survivors inside the lab are at war with the mutant gargoyle things which want to kill the male scientists and impregnate the female scientists. As the female scientists run for their lives and chastity, the male scientists are pretty inept at protecting them. Fear not...David, who already let his woman get raped and impregnated by the things, has a crossbow. 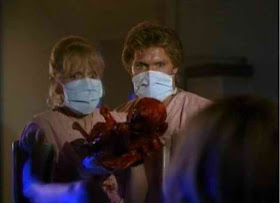 Will the incompetent David be able to save any of the science babes of the Rocky Mountain Lab? Do mutant gargoyle humanoids deserve love, too? Will the writer/director of this sequel allow his mom to be raped by the creatures? However distasteful this one sounds, remember, this is a Roger Corman film. Gratuitous and gory, what happens to the women in this film (much like its predecessor) will even have men wincing. For some prurient fun, enjoy "The Terror Within II," but don't discuss it at your next book club meeting.
Christopher Zisi at 8:02 AM
Share