Even Lambs Have Teeth, or I Spit on Your Grave 4

Wait...is there an "I Spit on Your Grave 4"? I think they have only done it up to Part 3. Say no more because 2015's "Even Lambs Have Teeth" could very well be that part 4. With a bit more frivolity and a little less ominousness, two young babes endure seedy rape and torture and traipse through rural Washington with axes and weed-whackers in search of justice. I know, we've all been there. As serious as this sounds, this film is done with a certain playfulness that will no doubt offend the perpetually offended. 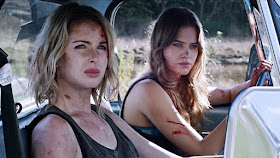 Sloane and Katie (Kirsten Zien and Tiera Skovbye) plan to work at an organic farm in order to earn enough money to go on a New York City shopping spree. These two beauties are dropped off in the proverbial rural town filled with religious fanatics and rapists. Two suave slime-balls (Jameson Parker and Darren Mann) abduct them, with help from their twisted mother (Gwynyth Walsh). The beauties are stripped to their undies and confined to containers where townsfolk pay to rape them. Yep, even the sheriff is part of this travesty. 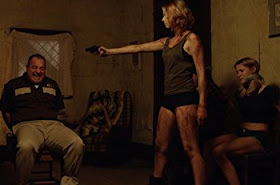 Their bondage won't last as Katie makes a move right out of "Underworld," and now the gals are free. They then go on a shopping spree which includes axes, rope, chains, a weed-whacker, and lighter fluid. Having been raped several times, each of the gals elect to stay in rural Washington and kill everyone who had a hand in their abduction/rapes. Looking more like 'Thelma and Louise' than the victims in the "I Spit on Your Grave" films, our duo inflict a very painful brand of justice, that in one case involves a rather painful enema. 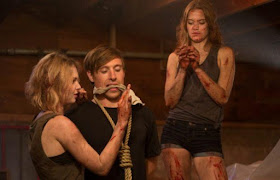 Will Sloane and Katie be able to complete their quest to rid Washington State of deviants, or will their luck run out? After surviving the tortuous captivity, how will these two beauties emerge? Is this film a loose metaphor seeking to highlight the increasing tension between Washington's rural culture versus the progressive Seattle culture that seeks to encroach on them? Enjoyable? Yes...but don't say that out loud as the more sophisticated among us won't approve. Enjoy a rape/revenge tale, and see "Even Lambs Have Teeth," directed by Terry Miles.
Christopher Zisi at 6:44 AM
Share