Deathsport, The Kung Fu Guy in a Loin Cloth

Don't fret...sure we see a lot of David Carradine in a loin cloth brandishing a big sword. Fortunately, if you can get beyond the 'oh gross' moment, this is a Roger Corman film and Claudia Jennings is in it, often times wearing less than a loin cloth. So let us delve back into the post-apocalyptic genre where radioactive mutants and tyrannical warlords try to ruin everyone's day. Hence, 1978's "Deathsport." 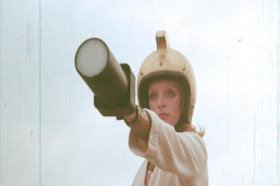 Kaz (Carradine) is a 'guide.' What's a 'guide'? Don't even ask. He's captured by soldiers from a tyrannical city. Also captured is the sultry Deneer (Jennings). She is also a 'guide.' It really isn't important what they are. Both are in jail-cells and communicate psychically. Lord Zirpola (David McLean) will force them to participate in 'Deathsport.' Deathsport throws people captured in the wasteland into an arena to be hunted down by thugs on death machines (motorcycles with death rays). Oh yeah, Lord Zirpola's brain is deteriorating making him more sadistic. This evil tyrant likes to have exotic dancers perform nude for him, while he tortures them with electricity. 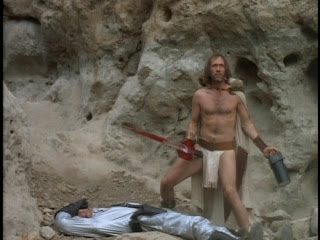 Anyway, Penthouse centerfold Valerie Rae Clark turns the table on Zirpola and kills him. The more evil Ankar (Richard Lynch) takes control. Kaz and Deneer form a psychic union which means a lot of things, most importantly...they engage in passionate pre-marital sex. Deathsport arrives and Kaz and Deneer pull a fast one and escape after purloining two death machines and bust out other prisoners as well. Ankar pursues, swearing to kill Kaz. Deneer and Kaz will meet radioactive mutants and will have to defeat them before they reach safety. Ankar and his thugs close in on them and our two amorous guides fall deeper in love. 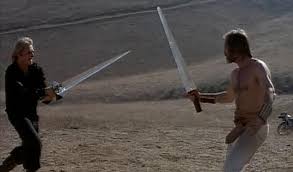 Will Kaz and Deneer rid themselves of the evil Ankar, find safety, and make little 'guides'?  Will Ankar, as the new leader of this tyrannical kingdom find more Penthouse centerfolds to torture? What happened to Valerie Rae Clark after this film? Actually she left acting and nude posing and became a school teacher and married some lucky guy and appears to have been happily married for decades. Not a great film, but if you can get beyond the whole 'guide' thing, well..."Deathsport" will definitely entertain you.
Christopher Zisi at 8:21 AM
Share