Debate team! Ha...yes! Only need to say 'debate team' and you all start drooling. Today we have a neat one about a very intelligent debate team beset by space creatures who shoot slime at them. The movie we have all been waiting for. [RESOLVED: A cheerleadeing squad beset by slime creatures would draw in more viewers than a victimized debate team]. Okay, its not a cheerleadeing squad, nor is it some sultry female wrestling troupe, but hey...aren't brains more important than sexiness? Hence 2017's "Paranormal Highway." 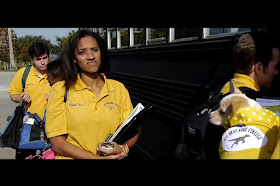 The Key West College debate team is en route, by bus, to the national finals in L.A....actually, not L.A., nor Paris, nor London...but Birmingham, Alabama! Hey, its debate, not football. Coaches Ron and Emily (Paul Waterman and Sharon DeRidder) are the coaches, and the married couple will celebrate their 36th anniversary on this trip. Oh so cute, the hunk Josh (Trini Kirtsey) and babe Jaiden (Carla Brown) are married debaters and she is pregnant. Even better, alternate Carlos Montoya (Alberto Martinez) is a ventriloquist and he has a monkey doll. But wait, Julie (Allisun Zagar) is a babe and we get to see her in a bikini. Even more important, the debate topic is...polar bears? Just go with that. We'll have non-gratuitous pool scenes and Papa John Pizza eating scenes...hey, this is a film about a debate team, not a cheerleading squad. 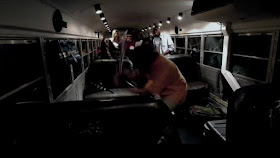 The bus breaks down and the creatures attack. What are they? Where are they from? They slime the bus and one by one drag off the coaches and debaters. No cell phone service exists in northern Florida and bright lights from the sky suggest something extraterrestrial. The very intelligent debaters begin to unravel and we kinda begin pulling for the nubile and cute Madison (Cassandra Giles)...so sad. The onslaught seems unstoppable. Uh oh...this attack on the debate team may not be an isolated incident and detective Kim (Brittany Levinson) will be victimized by the fiends as well. As the slime flows more freely and the debate club numbers dwindle, we begin to see a lot more than the national championship is at stake here.

[RESOLVED: A bus of sultry stewardesses beset by slimy space aliens would also have drawn more viewers than a debate team]. Will Key West College make it to the national finals? Do the slimy creatures have special plans for the bikini babe and the nubile Madison? Is all this moot? In all fairness, the actors and actresses who portray the debaters are quite good looking. Directed by Forrest and Brent Peterson, "Paranormal Highway" is more science fiction/horror than paranormal in make-up, which makes this a film you will want to find.
Christopher Zisi at 8:01 AM
Share