Haunted Hollywood, Revenge of the Silents

An important and often ignored era in Hollywood came to an unceremonious end. About the time of "The Great Depression," talking pictures started showing. The silent films, and their stars, could not compete. Some stars made the transition...most did not. Did the great talent of the Silent Era deserve to be packed away and forgotten? Hence the 2012 Charles Band film "Haunted Hollywood" (aka "The Dead Want Women"). 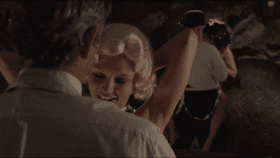 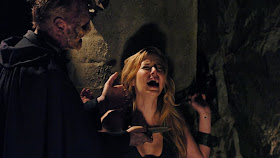 Present day, Reese (Jessica Morris) and Danni (Ariana Madix) are two beautiful realtors getting Rose's mansion ready for sale. No one has occupied it in 80 years...yep...haunted. Soon, the two beauties are visited by the ghosts of Sonny, Tubby, and Erik. The trio are menacing and won't let our realtors leave. Also appearing is one of the nude flappers. They chase the realtors, catch them, and bring them to the dungeon. The trio need the women for a rite that will bring Rose back to life. Torture and humiliation are endured by Reese and Danni, but it will soon get more dangerous for them. As daggers and guns make it into the festivities, the realtors get desperate and their fate begins to look hopeless. 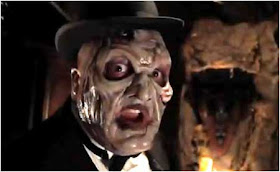 Will Reese and Danni figure out a way to escape their tormentors? What will the return of Rose mean for our beautiful realtors? Is this film a mere metaphor for the out-of-control real estate market in southern California? This is a decadent film and the fate of our realtors may not leave you smiling. "Haunted Hollywood" will appeal to prurient tastes of horror film fans, as the actresses in this film are all sultry...and perhaps ill-fated...you'll see.
Christopher Zisi at 1:55 PM
Share