It was such a beautiful thing. Danny Trejo, armed with a fully automatic machine gun spewing a gazillion rounds per second. Approaching him is a really mean looking Cyborg doing the same to him. Something will have to give. Oh...these cyborgs...horrific. All muscle and very evil looking, but instead of arms, these fiends have either machine guns, shot guns, or circular saws. To kill them one has to shoot them a bazillion times...all this is so scientific. 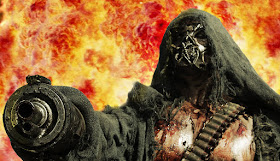 99% of humanity was wiped out when the government introduced a cyber virus into the main computer of a defense contractor. The result...all its drones and cyborgs, invented to fight wars, start murdering anything with a heartbeat. A ragtag group of survivors man a remote Nevada army base. Lt. Spears (Eve Mauro) discovers that the CEO of that defense firm, Killmore (Rocky Myers) is still alive. At first everyone wants to find him and kill him as Killmore is blamed for setting the machines on humanity. Spears has a better idea...capture him and make him explain how to kill all the machines. This will have to be a rescue mission as it appears Killmore is a prisoner of the mechanized monsters...or is he?

The rescue operation is a bloody one and some are killed, but Killmore has been retrieved. Killmore, a very handsome hunk, convinces them he is on their side and has some ideas of neutralizing the machines. Bad news, the machines figure out their whereabouts and attack. With so little manpower left, Spears and Killmore decide they need to hit the things at their core. A suicide mission perhaps, but time is not on their side. Oh yeah...Danny Ttejo wards a lot of the cyborgs off with machine guns. Spears gets sweatier, loses garments, and shows more cleavage as the film progresses, Killmore loses his shirt and flexes more upper body muscles to match Spears' continued sex-charged appearance. 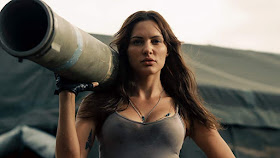 Will the very sultry Spears and buff Killmore save the world as they continue to shed clothes? Will these two engage in pre-marital sex with each other, or will amorous cyborgs be their next partners? In a post-apocalyptic wasteland, is there a babe for Danny Trejo?  The plot isn't too original, but both Killmore and Spears look really good as they sweat, bleed, and shoot guns. For some mindless and very gory post-apocalypse fun, enjoy "Cyborg X."
Christopher Zisi at 2:07 PM
Share