Billy the Kid Versus Dracula, Vampire Bites The Old West

No one film captures the historical accuracy of both 'the old west' and central Europe's famed vampire better than 1966's "Billy the Kid Versus Dracula." Gritty, realistic, and thought provoking, our film today provides us all with biting commentary about our daily struggles on this mortal coil we call life. There is no doubt, if Bram Stoker were alive today, this is the film he would recommend that captures the true essence of what he was trying to get across in Dracula. Okay...perhaps I've over stated the importance of this movie...slightly. 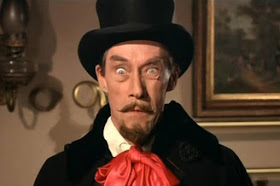 Dracula (John Carradine) arrives, on a stage, in the 'old west.' He immediately bites a very pretty German immigrant, Lisa (Hannie Landman) and a pretty Indian squaw (Charlita). The Indians blame the white man and massacre the stage allowing Dracula to assume the identity of a Mr. Underhill. Meanwhile, Billy the Kid (Chuck Courtney) is going straight and has a legitimate job as a foreman on a ranch. Ever smooth, Billie is engaged to the daughter of Mr. Bentley, killed on the stage, the lovely Elizabeth (Melinda Casey). Uh oh, Dracula arrives at the ranch with the intention of biting Elizabeth and making her his bride. 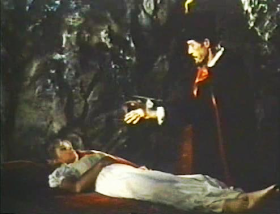 Having never laid eyes on her uncle, Dracula is able to convince Elizabeth he is her uncle. Now that her parents were massacred by Indians, Dracula tells Elizabeth he is now her guardian. Uh oh...Billy talks to some witnesses to the massacre and figures out the guy who arrived at the ranch is a vampire. Elizabeth, of course, doesn't believe Billie and Dracula is set to move in on her. As Billy tries to figure out a way to combat the bloodsucker and Elizabeth's doubt, Dracula finds ways into her bedroom and jugular. Impervious to bullets, Billy better figure out a way to slay the undead creature of the night. 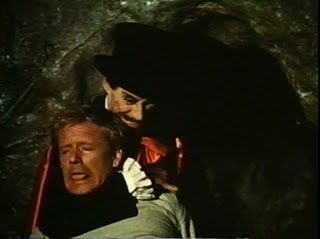 Will Billy be able to save Elizabeth from becoming a vampire bride? Will Dracula find he blends in the 'old west,' or is that Frankenstein's domain? Is this film a thinly veiled metaphor for the viciousness and inhumanity that was 'the old west'? For a lot of campy fun and a traditional vampire/western film, check out "Billy the Kid Versus Dracula."
Christopher Zisi at 2:07 PM
Share