Teenage Zombies, Can Teens Save America?

Toward the end of the Eisenhower Administration, the dreaded East (Soviet Union I guess...maybe China, too) continued their efforts to conquer America. 1959's "Teenage Zombies" is the best film that documents this effort. As a paranoid U.S. Government bumbles its way to thwart the East's efforts, some great looking teens will be asked to step up and serve. Directed by Jerry Warren, this B flick is required viewing for all U.S. counterintelligence agents. (Okay...maybe not) 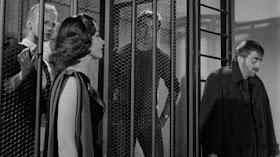 Four great looking teens, Regg (Don Sullivan), Skip (Paul Pepper), Julie (Mitzi Albertson), and Pam (Brianne Murphy) stumble upon an uncharted island while on their way to water-ski. As they investigate, they spy slavish zombie-like people. Soon, a mad-scientist, Dr. Myra (Katherine Victor), will take them prisoner. The sultry Dr. Myra hangs around her compound in revealing evening gowns and works for the dreaded East. Her plan...create an airborne substance that will turn all Americans into slavish zombies, controlled by...well...I guess the Soviets...or Chi-Coms. 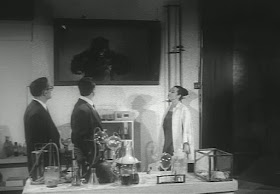 As agents for the East arrive, Dr. Myra is asked to speed up her experiments. Meanwhile, two friends of the captured teens, Dottie (Nan Green) and Morrie (Jay Hawk) desperately try to get the corrupt sheriff to look for their friends. Back on the island, the boys get out of their cage and waste the opportunity by doing nothing. Both Regg and Skip prove that chivalry has died and abandon Pam and Julie. Uh oh...Dr. Myra is ready to proceed and starts her plan to experiment on Pam and Julie. If the experiment works in turning Pam and Julie into slavish-zombies, the East will then be ready to drop the gas on the entire country. 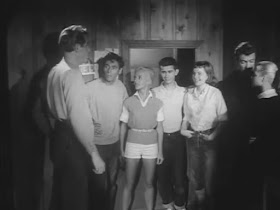 Will Skip and Regg man-up and return to rescue their girl-friends? Will Dr. Myra, clad in a sleek evening gown, engage in a cat-fight with one of her test subjects? Are millions of zombie-like Americans really a burden the Soviets want to take on? This film is lots of fun and...spoiler alert...yes Dr. Myra will engage in a most entertaining cat-fight that will see her stylish gown ruined...yes! For some fun that the whole family can watch (no gore or nudity), see "Teenage Zombies."
Christopher Zisi at 2:47 PM
Share