Out of Frame, Bleed For the Camera

Edgar Allan Poe believed that a beautiful woman was a great subject for his literature, but not as great as a dead beautiful woman.  Erotica in death isn't new for the art world, only not talked about in polite company.  Was Poe sane?  How about the millions that have enjoyed his work?  Fans of the genre will aver that they enjoy the work for its sophistication, passion, and the ability for it to arouse while capturing orgasmic periods in life.  Many will lie to you and tell you this art form is sick and demented, but their phony passion betrays their sincerity. Hence a 40 minute horror short, 2017's "Out of Frame." 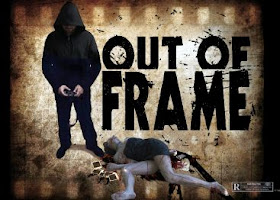 Photographer Damien Drake (Herschel Zahnd) newest photo shoot is falling flat at its showing. His agent Lorna (Chrissy Joy) believes in him, and loves him. Yep, Drake just can't capture the magic of his previous spread, in which he captured some beautiful women being murdered.  Bloodied and strangled, we assume these women were merely posing for the camera.  This morbid shoot, while winning praise and admiration from critics, may have taken Damien on a mental voyage which played havoc with his sanity. As his success at capturing women in the throes of murder awakened something scary inside our photographer, it also scared him and almost made him into something evil and twisted. Enter a couple of bad influences. Allette (Amber Underhill), a nubile and tattooed model who just ate up Damien's dead girl exhibit.  She would love for Damien to photograph her...being murdered. Of course, not really murdered. Then John (Robert Hatfield) arrives. This mysterious sadist is unrelenting in attempting to get Damien to shoot another dead lady photo spread. John is crude and tempting and seems to have some sort of hold on Damien's free will. The more Damien protests, the closer he gets to returning to that misogynistic artistic realm.  Uh oh...the look on Damien's face is changing and he begins looking as a doberman views a lamb-chop. 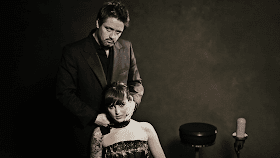 What happened to Damien in that dark world of death and misogyny?  Is John an art connoisseur or is he in fact part of Damien's psyche?  The women in the photo-shoot, they got up and left after the shoot was over, didn't they? In true Poe fashion, we are seeing Damien deteriorate, but is it his own doing...or outside influences? Director Joseph State does a fine job building the suspense and dread. You'll want to reach into the screen and pull Damien back by the collar from that dark place that beckons him.
Out of Frame Trailer
Out of Frame on Amazon
Christopher Zisi at 7:30 AM
Share