A Knife for the Ladies, Jack the Ripper in the Old West

I am dying here. I just wanna tell you about the last seven minutes of this film. I so want to tell you. Alas...no spoilers here, but take my word for it...the last seven minutes is over-the-top, with lots of exclamation points. Horrifying, taboo, and sick...yes!!! A western hits our blog today. A western all the way, it even has Jack Elam as the sheriff. But weirdness creeps in and a demented retelling of the Jack the Ripper legend emerges with some sick twists. In an oater in which dance-hall damsels are shredded like cheddar on a salad, we take a peek at 1974's "A Knife for the Ladies." 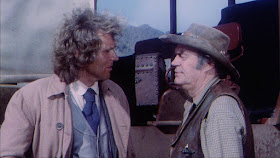 Someone is slitting the throats of all the prostitutes in Mescal, Arizona. The dance-hall damsel wannabes are being butchered and this is driving businesses and respectable folk out of town. Sheriff Jarrod (Elam) is battling the bottle and in no condition to investigate. Sensing Mescal is soon to become a ghost town, a wealthy banker (John Kellogg) hires a private detective, Burns (Jeff Cooper). Burns is smart, educated, reads thick books with big words and is a spitting image of David Hasselhoff. Oh yes, fans of 1970s sports will love it that Derek Sanderson (Boston Bruins) and Fred Biletnikoff (Oakland Raiders) also star. These two kill a Mexican believing they have killed the Jack the Ripper fiend in their town...they are wrong. 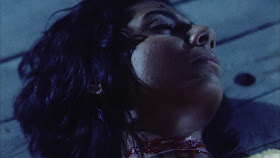 As more beauties assume room temperature, Burns inspires Jarrod to sober up and join the fight. What they discover will be shocking. The ladies of the night weren't the only targets of this mad butcher. Travis Mescal, from the founding family of the town, was the initial victim. As the film progresses, a creepy undertaker emerges as a suspect, but is this too easy? After some grave robbing, corpse assault, and some good old fashioned gun fighting, Burns and Jarrod turn their attention to a most unlikely suspect. They better hurry as Jenny (Diana Ewing) is the only babe left in Mescal and what waits for her is simply ghastly. 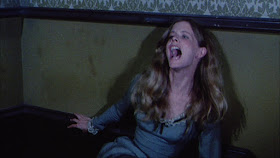 Can Jarrod and Burns figure out who the fiend is in time to prevent Jenny's soiling and demise? Just what secrets are brought to light as a grave is opened?  What else does that weird undertaker do to the corpses of formerly sultry hookers? Jack Elam is great and sets this film apart by his initial quote as we first meet him. In a drunken stupor, he blares out (with no context) "18 years I've been banging his wife and what do I get? A kick in the but." I wish I said that. Directed by Larry G. Spangler, "A Knife for the Ladies" is a twisted tale of the old west that horror fans will enjoy.
Christopher Zisi at 12:00 AM
Share