The sultry Lilith. She dons a tight leather latex body suit. A coffin adorns her bedroom, stuffed with swords, knives, pistols, machine-guns, and various other blades. Oh yes...she's a centuries old vampire with very menacing fangs (good luck finding her on Match.com). A few years before Kate Beckinsale became a household name, as the "Underworld" franchise was born, Eileen Daly was Lilith in 1998's "Razor Blade Smile." With lots of spurting blood, gratuitous sex scenes, and many decapitations, we can forgive the faults of this tale and enjoy it for its obvious assets. 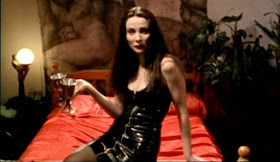 Hundreds of years old, the vampire Lilith runs a club catering to vampire wannabes. That's just a cover, however. Her real job is that of an assassin. Of course, beautiful women clad in tight latex suits are either vampires or assassins...in this case, Lilith is both. We go with her on one of her kills, some rich guy. She offs him in the bathtub and also drinks his blood. Uh oh...this guy is part of a secret society that pretty much runs the world. You know, the Illuminati. Now, Lilith is on the run. The other power brokers figure out that she is the assassin, as their own cop, Det. Price (Jonathan Coote) is on the case. Oh yes, the vampire Lilith has needs...blood! While hiding she enjoys lots of sex...mixed with blood. She seduces vamp-wannabe Ariauna (Heidi James). In a blood red love scene, the two find ecstasy before Ariauna's blood is splattered all over her walls. 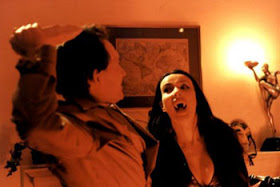 More sex...Platinum (Kevin Howarth). Platinum is her boss...he gives Lilith the names of the people she needs to kill. No questions asked. She should have asked a few, however. These two have a lot of pre-marital sex and Lilith admits to loving him. Alas...when a beautiful vamp finds love...the blood splatters all over the place. Now the Illuminati grabs Platinum, and flushes Lilith out into the open. With the Illuminati seeming to have an advantage on our babe vampire, Lilith will find out that this group is headed by a very old (...very, very old) acquaintance. Yep, you guessed it, the chap who turned her into a vampire centuries ago, Sethane Blake (Christopher Adamson). 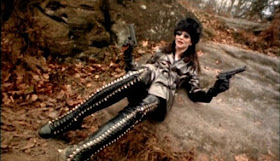 Does Lilith have what it takes to deliver final vengeance on Sethane, and save her lover, Platinum? Did Kate Beckinsale watch "Razor Blade Smile" when she was cast as the role of Selene? Just how does one do all of those tricky sword maneuvers while wearing a latex suit several sizes too small? A bit rough around the edges, and not as well presented as "Underworld," "Razor Blade Smile" is a lot of fun and Eileen Daly plays to the camera very well.  For some gratuitous sex and gore, with fangs and swords...enjoy this Jake West creation, "Razor Blade Smile."
Christopher Zisi at 1:49 AM
Share