Angel: Black Angel, Nymphomaniacs and the Men They Love

How do you know if you have married a nymphomaniac? If, while driving away from the church on your wedding day, the lovely bride, clad in a white gown, satisfies you orally while the two of you are speeding down the highway. This may come as a surprise to many of you, but on occasion, this doesn't end well. Ecstasy and orgasm one moment and a split second later....BOOM!!! Head on collision. Hence our film today, from Italy 1989's "Angel: Black Angel" (aka "Arabella l'Angelo Nero"). 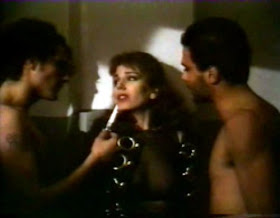 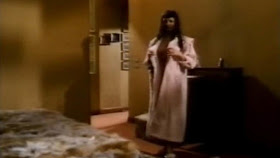 Uh oh! The men Arabella has weird sex with end up castrated by a scissors and gutted. On the case is the sultry Inspector Gina (Valentina Visconti). She is beautiful and has a really hot lesbian lover. Uh oh, the beautiful lover, Agnese (Rena Niehaus) betrays and humiliates Gina. Agnese will slap her silly in a cat-fight and dump her superior (Agnese is one of Gina's detectives). Can you guess Agnese's fate? Right, a scissors up her...well, you know.  Now Gina is the number one suspect and to clear her name she must find the real killer. As Gina is led to Arabella and her household she will either solve the case or end up skewered by a rusty scrap-booking implement. 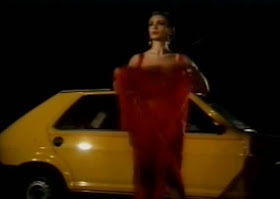 Could our nympho-babe, Arabella, also be the killer? Is Frank's book destined for the bestseller list in either the fiction or 'how to' sections? Will Gina and Arabella engage in a deadly cat-fight or end up in a passionate love scene? Sordid and deviant, there is nudity on the screen in about 44 of this film's 88 minutes. Fans of Giallo will figure out the surprise ending but the arousal factor will make up for that. For a great cinematic experience that you won't mention in polite company, enjoy "Angel: Black Angel," directed by Stelvio Massi.
Christopher Zisi at 12:38 AM
Share