Nothing like a cute robot friend to accompany us through an apocalyptic wasteland.  Worry not, this little mechanical buddy isn't quite out of the classic Ally Sheedy film "Short Circuit," as it tends to leave lots of carnage in it's wake.  Today we take a peek at 1986's "Wired to Kill."  As is usually the case, the pure of heart are tormented in plague infested lands, but can brains rise above the evil that infests? 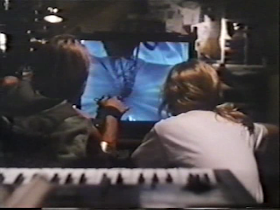 After the great plague of 1992, safe zones that were set up and quarantined are now areas free from law and order and beset by psycho gangs. Teenage babe, Rebecca (Emily Longstreth) finds lodging with a kind family.  She hits it off with teenage genius Steve (Devin Hoelscher).  Steve creates music and is an electronic and computer whiz.  Uh oh, before Steve can seduce Rebecca, a psycho gang converges on this merry home.  Eventually Steve's grandmother and mom will be killed or maimed, and Steve's legs will be pulverized.  Instead of cowering, the now disabled Steve will plot revenge. 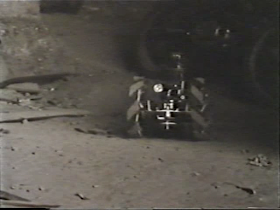 As our apocalyptic wastoid gang plots to eliminate Steve and the fare Rebecca, our heroes build a high-tech robot, Winston.  Winston is able to infiltrate the gang's compound and begins causing havoc.  At first, Winston ruins drug deals, but it does plant bugs so Steve and Rebecca can listen to their plans.  Eventually Steve and Rebecca fit Winston with armaments and are able to cause carnage within the compound, and Rebecca is able to provide them heroine laced with battery acid.  When the nubile Rebecca is captured and tortured by the gang, Steve must ramp up his and Winston's efforts to wipe-out his tormentors. 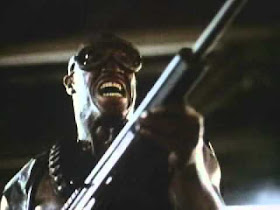 What will our gang do to Rebecca?  Can Winston be fitted with a small nuclear device?  Can we agree that writer/director Francis Schaeffer has accurately depicted, however metaphorically, the 1990s?  This is a standard film but for many subtleties.  In the hospital scenes an endless loop over the loud speakers reminds all patients that they have the constitutional right to sue their doctors, courtesy of the HHS.  Then at the jail, an endless loop reminds all criminals and miscreants that they have the right to sue the police, also courtesy of the HHS. For a cute film, with a mean robot, that warns us where we might be headed if most of us become semi-mutant, plague infested insaniacs...see "Wired to Kill."
Christopher Zisi at 1:41 AM
Share