The best shark movies have all taken place in Arkansas. Who can forget the 2015 classic Sharkansas Women's Prison Massacre ? Leave it to the Syfy Channel to capitalize on this, which brings us to today's feature...2016's "Ozark Sharks." Perhaps a thinly veiled metaphor of the horrors the Clinton family unleashed on this nation, or a demented retelling of the hit TV show "Family Ties," this film fills a need for all of us. Heartwarming and exploitative, "Ozark Sharks" (directed by Misty Talley) may be a great alternative to any Herman Melville fish story.

While playing in an Arkansas lake, some great looking college babes and hunks are pureed by a shark. Dawn (Ashton Leigh), an impressive bikini babe, is the only survivor.  Enter a Colorado family. They arrive in the Ozarks with grandma to enjoy a family vacation. As teen age daughter Molly (Allisyn Ashley Arm) takes grandma to the lake, brother Harrison (Dave Davis) and Molly's BF Curtis (Ross Britz) visit the bait shop. In a scene that will warm all of our hearts, Grandma is eaten by a man-eater in a foot of water. Only in mild shock...well, maybe not in shock at all, Molly races to the bait shop to inform her brother that Grandma is no more. Jones (Thomas Francis Murphy), the bait shop owner is pumped. This guy has been preparing for the zombie apocalypse and is eager to go shark hunting. 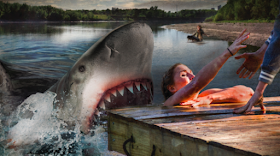 The siblings realize their mom and dad are out on the lake fishing and desperately try to find them. Along the way, Harrison rescues bikini babe Dawn, and Jones takes arms Curtis and Molly for a war against killer fish. Apparently six sharks have moved into these lakes in the Ozarks. More bikini babes will be eaten, so will a fisherman and some assorted schmucks. Now heavily armed, and with the sultry Dawn on the team, the ticked off family sets out on their rescue and destroy mission. The war will have its casualties and be quite explosive. 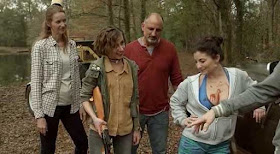 Will our siblings in peril defeat the horde of man-eaters? Will the sultry Dawn survive or meet the same fate as dozens of other bikini babes in this film? Is "Ozark Sharks" merely a cheap exploitation flick showcasing scantily clad bikini babes in much peril, or a serious man versus nature film? Not that there is anything wrong with exploitation film highlighting bikini babes...after all, if we want serious man versus nature stuff we could watch reruns of Mutual of Omaha's Wild Kingdom. For sheer Syfy Channel fun, enjoy "Ozark Sharks."
Christopher Zisi at 5:02 AM
Share